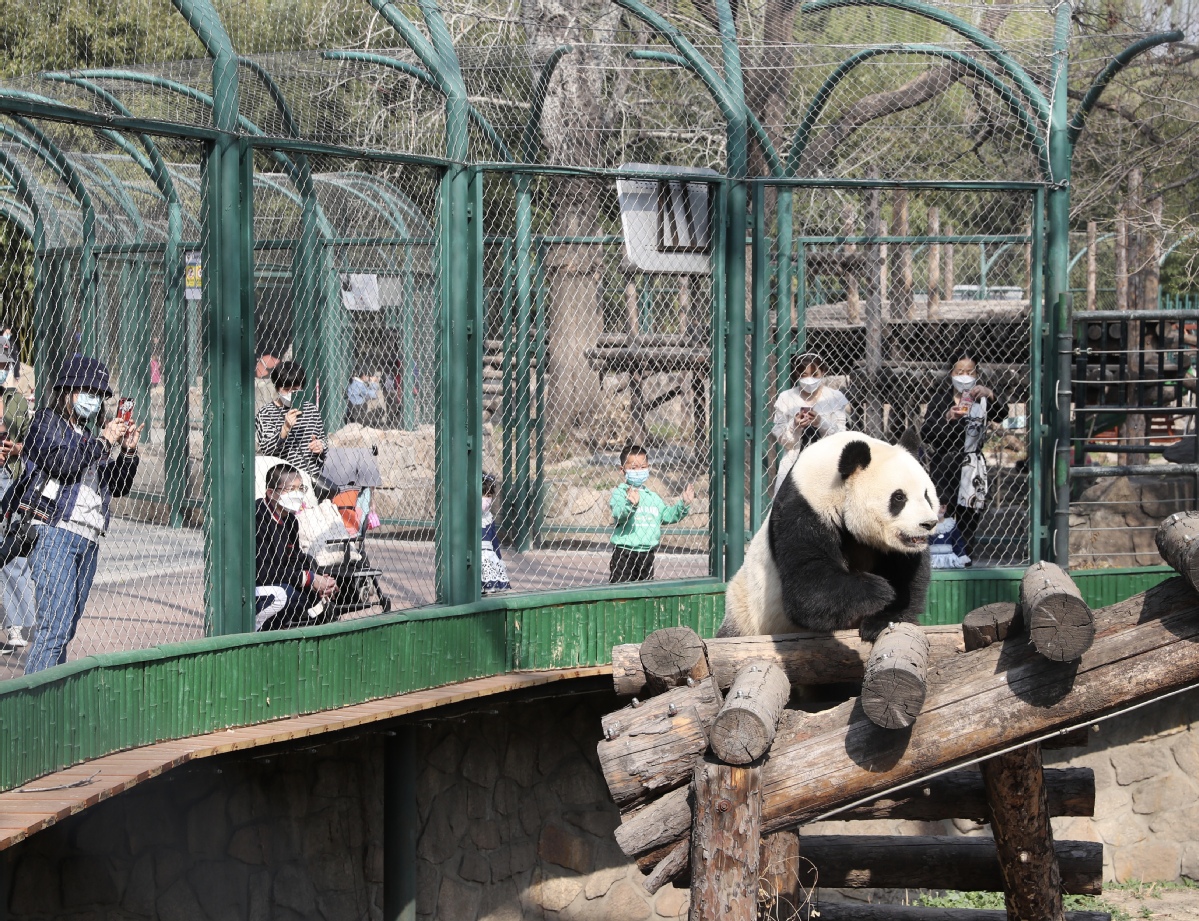 Visitors look at a giant panda at the Beijing Zoo on March 23, 2020. After being closed for 58 days, the zoo officially reopened to public on Monday. Visitors must book tickets online with their real names and ID numbers at least one day before their visit. [Photo by Feng Yongbin/chinadaily.com.cn]

Regular checks carried out on animals

Beijing Zoo reopened on Monday after being closed since Jan 24 as part of efforts to control the novel coronavirus pneumonia outbreak.

The 5,000 animals have been fed well, are housed in sanitized areas and are enjoying the spring sunshine.

Zhang Chenglin, the zoo’s deputy director, said, “Some of the animals, such as the pandas, preferred to have more exercise when the zoo was empty.”

Ma Tao, who looks after pandas at the zoo, starts his working day at 7 am by taking a fixed route on a delivery truck to feed the animals in their enclosure.

Workers such as Ma help prepare 2,000 kilograms of food for animals at the zoo every day, including chopped carrots, fresh cucumbers and raw meat.

“My happiest time of the day is to see the animals eating, even if sometimes they take a bite out of my arm,” Ma, who is in his 40s, said jokingly. He added that it usually takes about three hours to distribute food to all the animals.

Occasionally, they need “afternoon tea”, with grapes being the red pandas’ favorite. Ma often feeds these animals by hand.

With snow falling in Beijing in the middle of last month, keepers spent more time checking on the animals. Some of the inhabitants preferred to keep warm in their enclosures, while others enjoyed being outdoors.

Zhang said: “Tufted deer prefer to be outside and can resist the cold even in extreme wintry conditions. They jump and run around frequently in the snow.”

In the past month, zookeepers have been engaging with these animals to win their trust.

Zhang said he is most concerned about baby tufted deer, as they are extremely timid. He added that the term of a pregnant tufted deer is between three and seven months, during which time the animals must be provided with a quiet and stable environment to ensure they have adequate rest.

In the wild, tufted deer, which are listed as a national first-class protected wild animal, usually inhabit forests at an altitude of about 1,000 meters.

“Keepers need to be patient so that these creatures can get to know them after the first contact,” Zhang said. “In the case of a newborn tufted deer, a keeper has to come to the animal at least four times before it will trust him and eat from his hand.”

Zhang said disinfection measures at the zoo have been strengthened.

“We completely disinfect and sterilize the zoo once a week,” he said, adding that the animals’ food is carefully checked and purchased from Xinfadi, a wholesale market for agricultural products about 20 kilometers south of the zoo.

“We have sufficient food stored at the zoo to feed the animals for six months,” he said, adding that designated suppliers have to be contacted in advance for deliveries of some food, such as bamboo for the pandas.

Zhang said online trips to the zoo are available, where visitors can see enclosures being disinfected and the animals fed.

Beijing resident Wang Shengru and her 6-year-old daughter are eagerly waiting to revisit the zoo. The chimpanzees are the young girl’s favorite, as the animals make her laugh when they eat bananas.

Due to the outbreak, both mother and daughter have remained at home for more than one month. “She misses her animal friends terribly,” Wang said.

Since Feb 22, Hongshan Forest Zoo in Nanjing, Jiangsu province, has been livestreaming footage of animals being fed. In the mornings during weekends, two “hosts” use a phone camera to take online visitors on a sightseeing tour of the zoological park.

Many people have voiced concern about food supplies for animals at the zoo, with online donation campaigns being launched to provide them with fresh vegetables, fruit and meat. The livestreaming sessions show that the animals are being fed well. 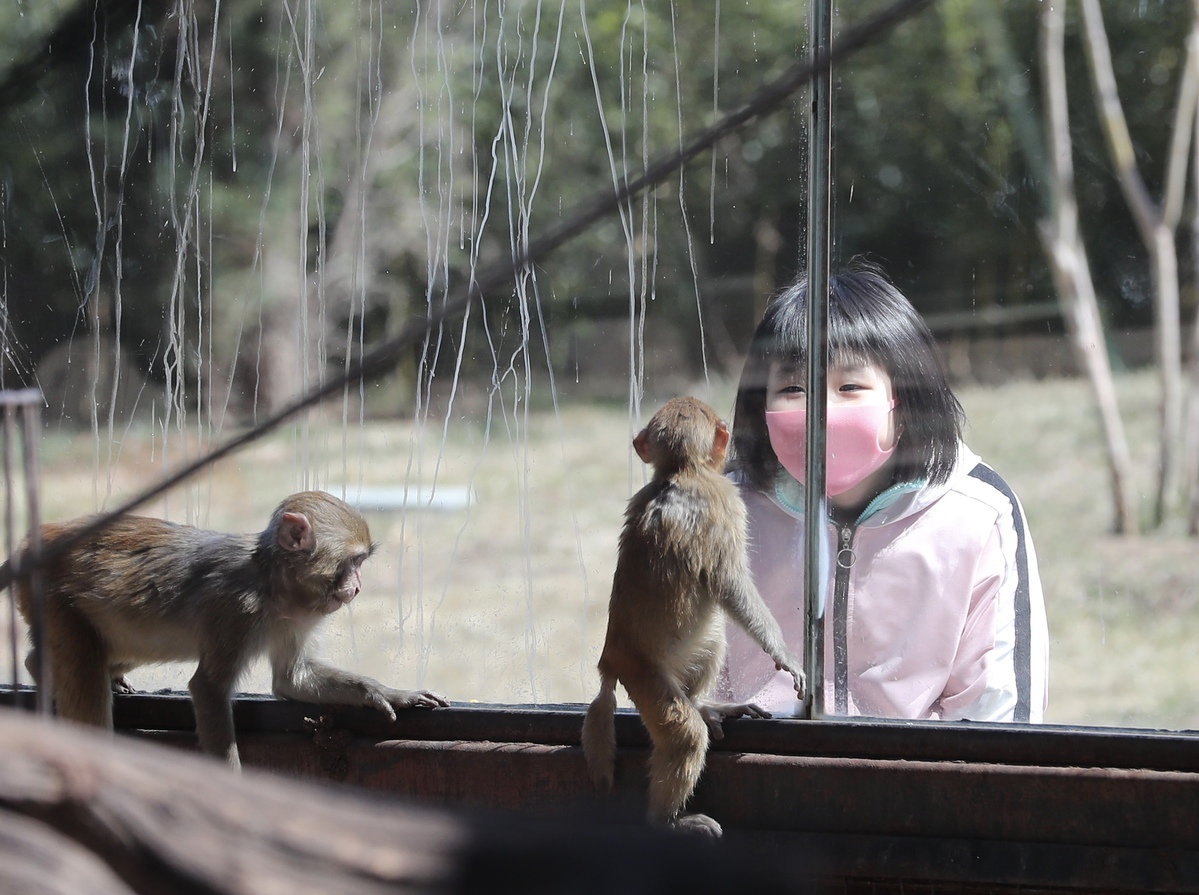 A girl interacts with monkeys at the Beijing Zoo on March 23, 2020. [Photo by Feng Yongbin/chinadaily.com.cn]

In Ya’an, Sichuan province, Su Lingxiao takes a bus to the Bifengxia base of the China Conservation and Research Center for the Giant Panda at 8 am.

Together with colleagues living in the base’s dormitories in downtown Ya’an, the 26-year-old keeper reaches the mountainside facility in less than an hour to begin her daily routine of caring for a panda.

“The only unusual thing at the base since the novel coronavirus pneumonia outbreak has been the frequent use of disinfectant,” Su said.

Although the base has been closed since late January due to the outbreak, disinfectant has been sprayed there twice a week on the interior roads.

After eating breakfast in the canteen, Su goes to the panda’s enclosure to check on the animal’s health and to see how much bamboo it has eaten during the night.

“If everything is all right, I start cleaning the enclosure and preparing the panda’s food, which includes bamboo, bamboo shoots, a special bun, carrots and apples,” she said.

“I feed the panda four times a day, the last time being just before I take the bus back to the dormitory at 5 pm,” she said. “My routine has remained exactly the same as before the outbreak.”

Su is one of some 20 keepers at the base. To celebrate Spring Festival, which fell on Jan 25, she stayed in her home county of Longchang, Sichuan, for 10 days. On Feb 4, her father drove her back to the dormitories in Ya’an, a journey of three hours.

“I was in quarantine for 14 days before I returned to work. Four other keepers also went home and had to be quarantined,” Su said.

An animal lover since primary school, Su raised rabbits in her home village in Longchang. After majoring in animal medicine at Jilin Agricultural Science and Technology University in Liaoning province, she has worked at the base since 2016.

The bus traveling between the dormitories and the center is largely empty because only keepers and some administrative staff members can be admitted due to the outbreak. Employees who normally cater to visitors have remained at home, Su said.

Different species of bamboo are planted at the center’s four bases, but for the pandas, their favorite food is bought in other areas of Sichuan.

Zhang Guiquan, head of the Shenshuping base at the center and a senior veterinarian, said: “Although transportation is not as convenient as before the outbreak, there has been no problem buying bamboo. There is an ample supply for the pandas at all the center’s bases.

“Generally speaking, pandas do not contract pneumonia. I don’t think they will fall victim to the virus as I’ve seen no cases of people transmitting it to animals.”

The China Conservation and Research Center for the Giant Panda is home to 312 of the world’s 600 pandas in captivity, the largest such population in the world.

Pandas are native to the southwestern province of Sichuan and to Shaanxi and Gansu provinces in the northwest of China.

According to the 2019 Annual Conference of the Chinese Committee of Giant Panda Breeding Techniques, held in November in Chengdu, Sichuan, there are more than 1,300 pandas living in the wild in the province, accounting for 75 percent of the national total. 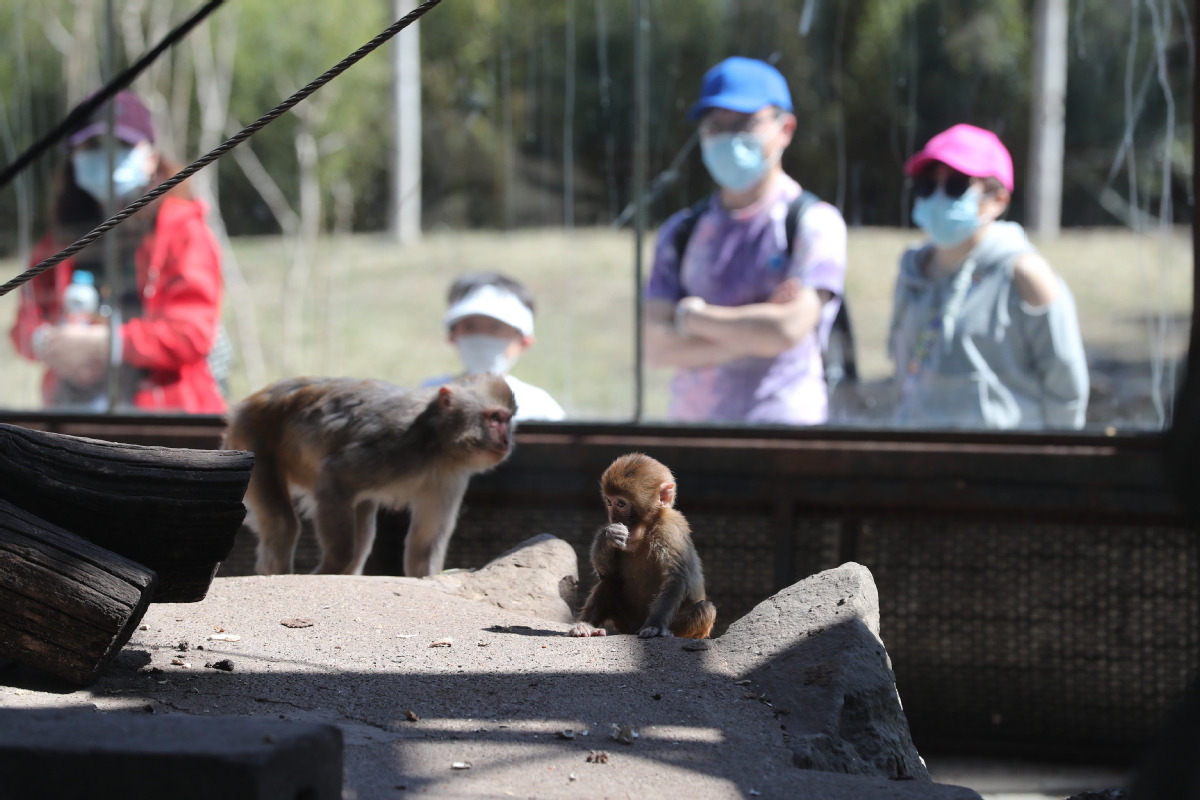 Visitors view monkeys at the Beijing Zoo on March 23, 2020. [Photo by Feng Yongbin/chinadaily.com.cn] 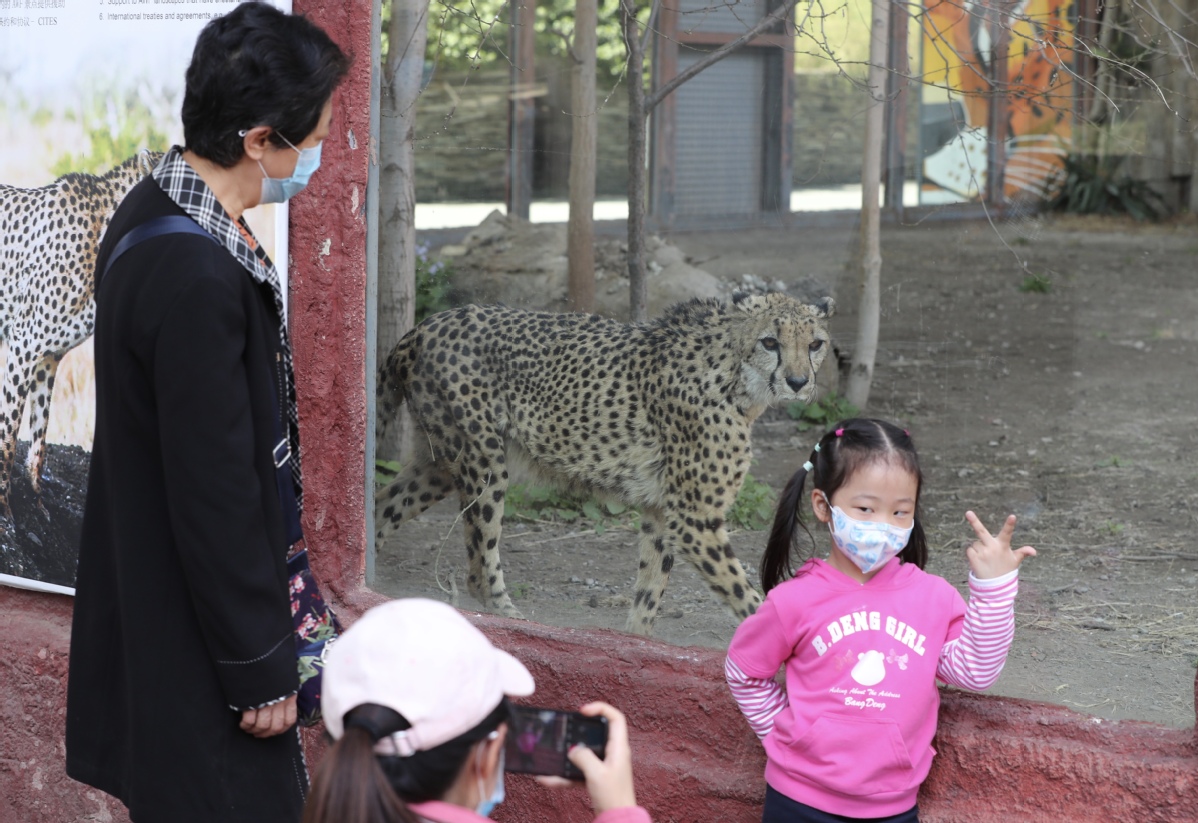 A girl takes a photo with cheetahs at the Beijing Zoo on March 23, 2020. [Photo by Feng Yongbin/chinadaily.com.cn] 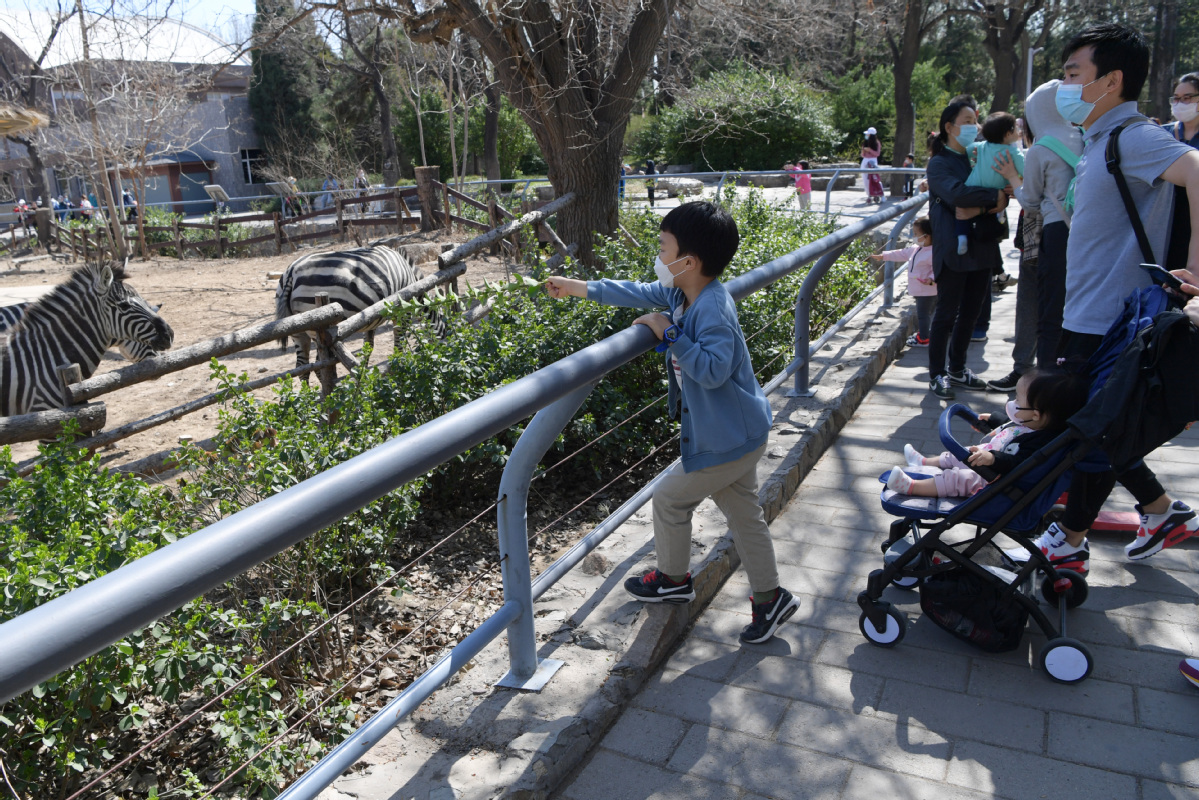 Visitors interact with zebras at the Beijing Zoo on March 23, 2020. [Photo by Wei Xiaohao/chinadaily.com.cn] 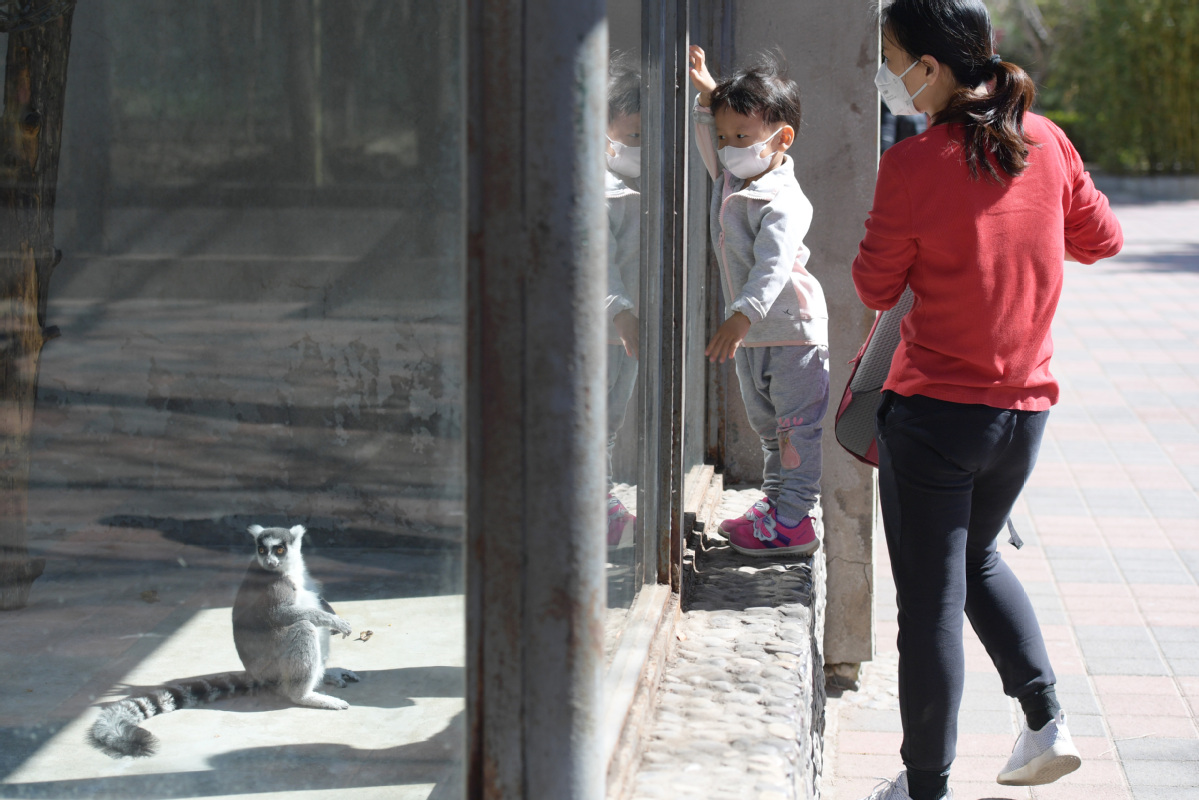 Visitors interact with a ring-tailed lemur at the Beijing Zoo on March 23, 2020. [Photo by Wei Xiaohao/chinadaily.com.cn] 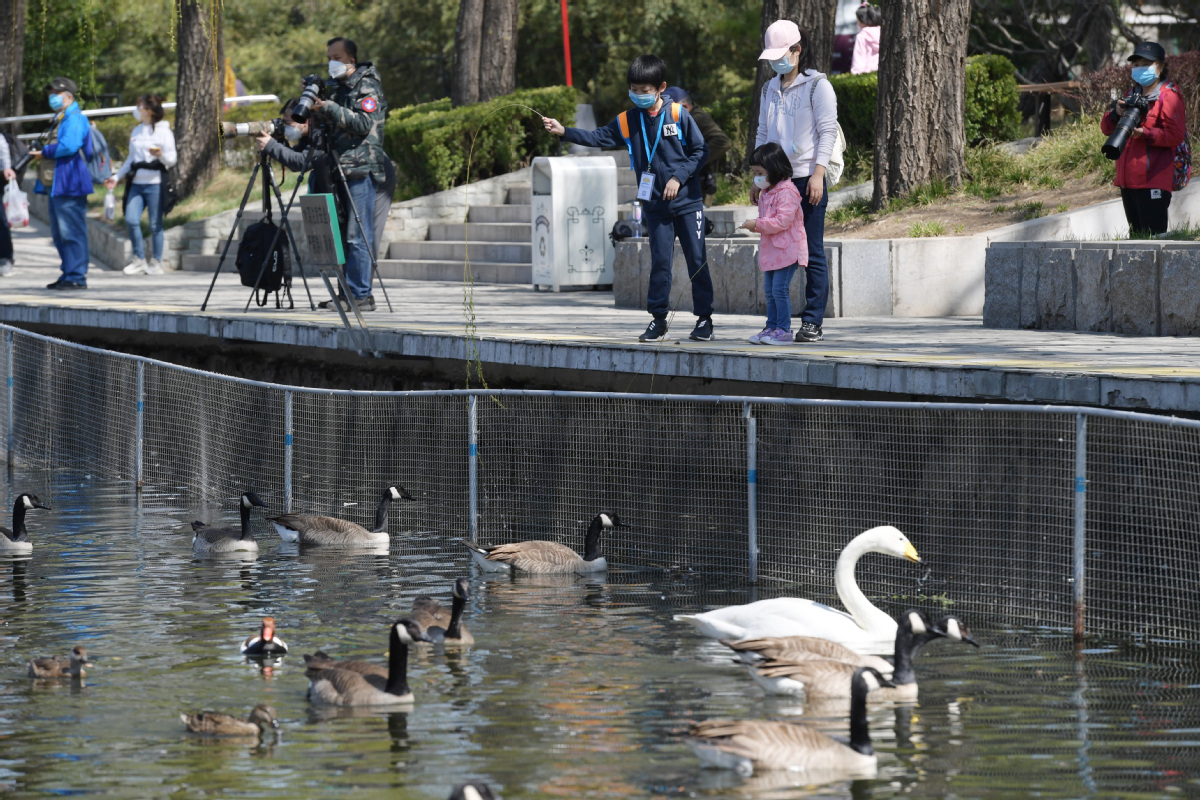 Visitors enjoy the view by a lake at the Beijing Zoo. [Photo by Wei Xiaohao/chinadaily.com.cn] 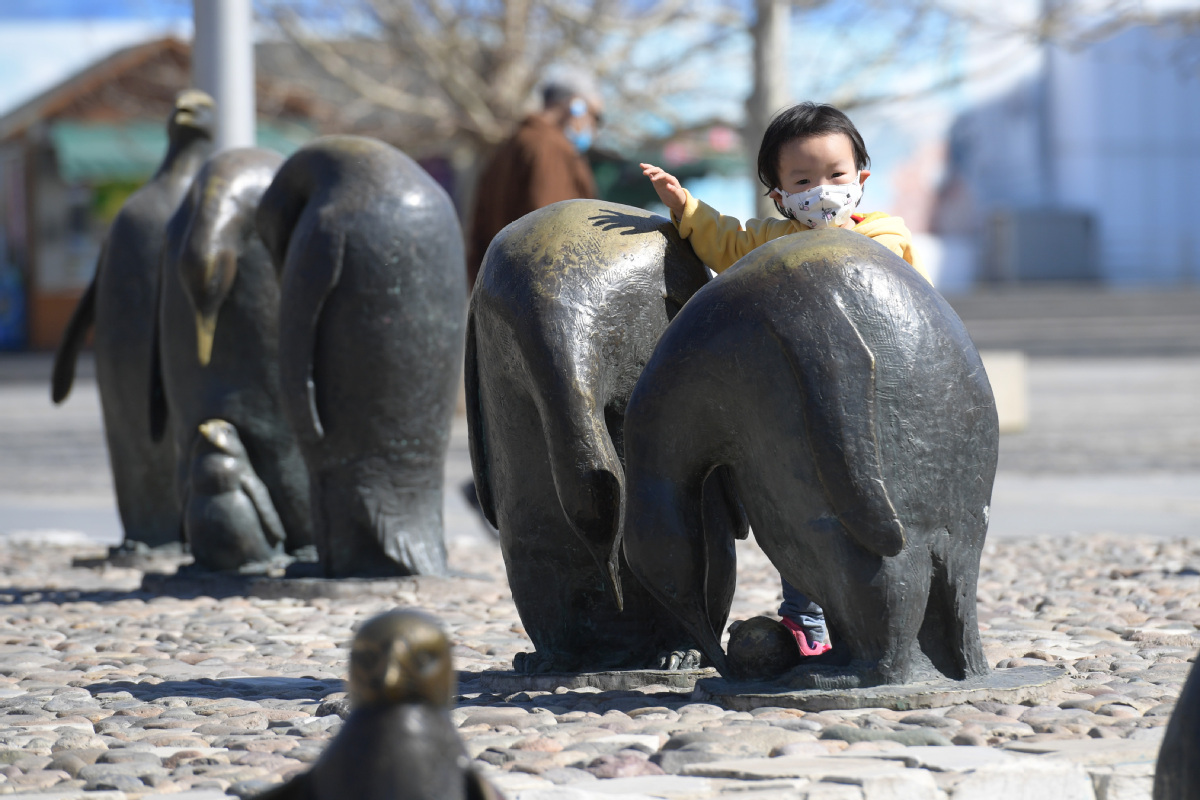 A child plays amid animal sculptures at the Beijing Zoo. [Photo by Wei Xiaohao/chinadaily.com.cn]