China’s coronavirus epicenter has reported no new cases of the disease for the first time since the outbreak began there in late December.

The country’s health ministry said Thursday that 34 cases were detected over the last 24 hours — but all of the positive results came from people arriving to the country from abroad.

The fact that there were no new infections in the virus hotbed city of Wuhan or the surrounding Hubei province signals an end to the outbreak in China could be in sight.

But experts have said there will need to be 14 consecutive days without new cases for the outbreak to be considered over.

Infections could re-emerge once lockdowns are lifted across the country.

China has begun loosening travel restrictions, but has stepped up 14-day quarantines on those coming into Beijing, Shanghai and elsewhere from overseas.

“It’s very clear that the actions taken in China have almost brought to an end their first wave of infections,” Ben Cowling, a professor at Hong Kong University’s School of Public Health told The New York Times.

“The question is what will happen if there’s a second wave, because the kind of measures that China has implemented are not necessarily sustainable in the long term.” 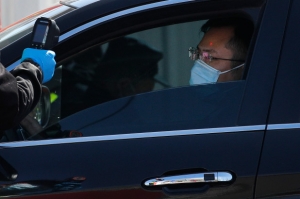