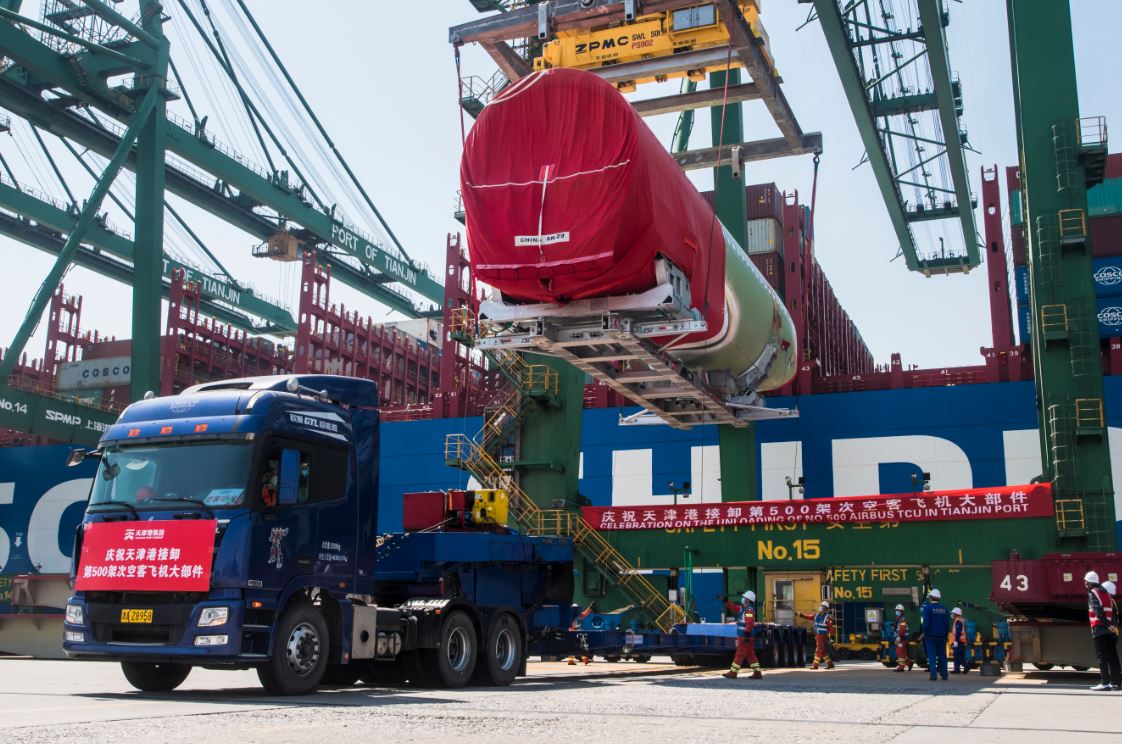 Components for assembling Airbus aircraft are unloaded in Tianjin. [Photo/Xinhua]

China’s western region continued to be the bright spot of the economy, as the robust first-quarter indicators signaled its remarkable resilience and speedy recovery despite the COVID-19 epidemic, experts said on Wednesday.

All the provincial-level areas in western China fared much better than the nationwide GDP contraction in the first three months, with eight of them figuring among the 10 with the best growth results. China said its GDP contracted to 6.8 percent during the first quarter and subsequently all the 31 provincial-level regions on the mainland came out with their performances amid the COVID-19 outbreak by Wednesday.

Southwest China’s Tibet autonomous region was the only provincial-level region that saw a positive GDP growth of 1 percent on a yearly basis, the local statistical bureau said on Wednesday.

Unlike the central and eastern provinces, the western region had a relatively milder economic effect from the COVID-19 epidemic as its low population density helped curb the spread of the virus, said Ying Xiwen, a regional economics researcher with China Minsheng Bank.

Most of these regions are also less economically connected with Hubei, the hardest-hit province during the first quarter after its GDP fell by 39.2 percent, he said.

For instance, the number of confirmed cases in a million of population was about 3 in both Xinjiang and Qinghai as of Monday, equivalent to only one-tenth of the number in Beijing and Shanghai, he said.

The GDP of Beijing dropped by 6.6 percent in the first quarter while in Shanghai it declined by 6.7 percent, among the worst 10 readings in the 31 regions.

Eastern regions like Tianjin, Heilongjiang and Liaoning were even more affected with the drops in GDP steeper than the national level.

The western region’s outperformance also reflected the trend that the economic growth engine is gradually shifting from the eastern coastal region to the inland western region, said Liu Xuezhi, a senior researcher at the Financial Research Center of Bank of Communications.

“The central and western region are on track for rapid economic growth, with urbanization speeding up and industrial activities coming in from the eastern region,” Liu said.

For this year and several years to come, economic growth in the western region is set to outperform the more developed eastern region, Liu said.

Economic growth is expected to recover during the rest of the year across the nation, Liu said, adding that a majority of the provinces would report positive growth in the second quarter and reach the pre-outbreak level during the third or fourth quarter.

Economic growth in the coastal and central regions will return to normalcy slower than the western region, as the former face higher risks of imported virus cases and are more reliant on external demand, said Ying.

Ying called for deepening reforms and industrial upgrades to deal with downside risks brought by external uncertainties, exemplifying that digitalization has helped the services sector to show “unexpected resilience” despite the COVID-19 shock.

“As traditional services like catering and accommodation have been battered, the resilience mainly came from the strong growth of internet-related services,” he said.

Added-value created by China’s information transmission, software and information technology services increased by 13.2 percent on a yearly basis during the first quarter. The sector grew by nearly one-third over the same period in Hunan province, which registered one of the best first-quarter economic results despite being severely affected by the epidemic, officials said.