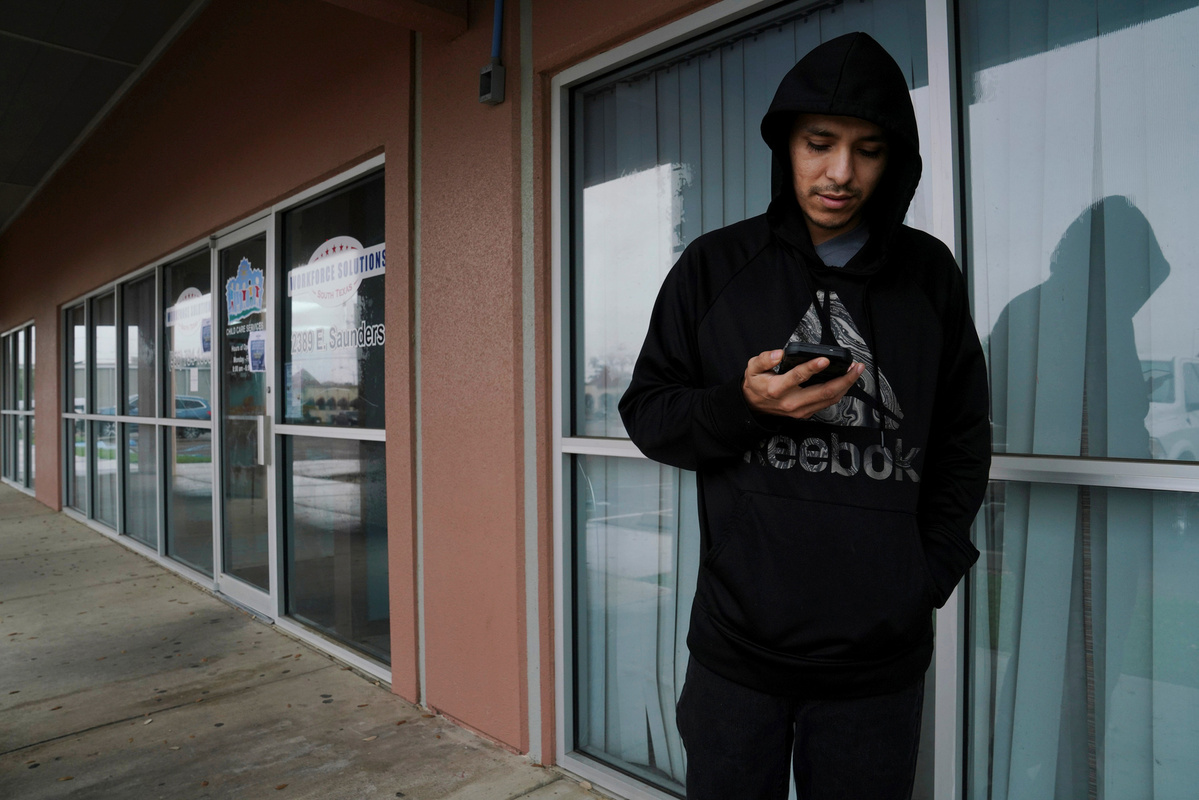 Alberto Mendoza checks a website to apply for unemployment benefits outside of the Workforce Solutions for South Texas offices in Laredo, Texas, US, March 20, 2020. [Photo /Agencies]

WASHINGTON – The number of Americans filing claims for unemployment benefits surged to a record of more than 3 million last week as strict measures to contain the coronavirus pandemic ground the country to a sudden halt, unleashing a wave of layoffs that likely brought an end to the longest employment boom in US history.

The weekly jobless claims report from the Labor Department on Thursday offered the clearest evidence yet of the coronavirus’ devastating impact on the economy, which has forced the Federal Reserve to take extraordinary steps and the US Congress to assemble a record $2 trillion stimulus package.

Economists say the economy is already in recession. Weekly claims are the most timely labor market indicator.

Initial claims for unemployment benefits rose 3,001,000 to a seasonally adjusted 3.28 million in the week ending March 21, eclipsing the previous record of 695,000 set in 1982, the Labor Department said.

Economists polled by Reuters had forecast claims would rise to 1 million, though estimates were as high as 4 million.

The Labor Department attributed the surge to COVID-19, the respiratory illness caused by the coronavirus.

“During the week ending March 21, the increase in initial claims are due to the impacts of the COVID-19 virus,” the department said. “States continued to cite services industries broadly, particularly accommodation and food service. Additional industries heavily cited for the increases included the health care and social assistance, arts, entertainment and recreation, transportation and warehousing, and manufacturing industries.”

Governors in at least 18 states, accounting for nearly half the country’s population, have ordered residents to stay mostly indoors. “Non-essential” businesses have also been ordered closed. According to economists, a fifth of the workforce is on some form of lockdown.

Last week’s claims data likely will have no impact on March’s employment report as it falls outside the period during which the government surveyed employers for nonfarm payrolls, which was the week to March 14. Economists, however, say the rush for benefits in that survey week suggests payrolls declined this month, which would end nearly 9-1/2 years of job growth.

“Jobs will decline in March,” said Mark Zandi, chief economist at Moody’s Analytics in West Chester, Pennsylvania. “There are numerous reports of laid-off workers unable to file for unemployment insurance because so many people are trying to file at the same time. Millions of job losses are likely in coming weeks.”