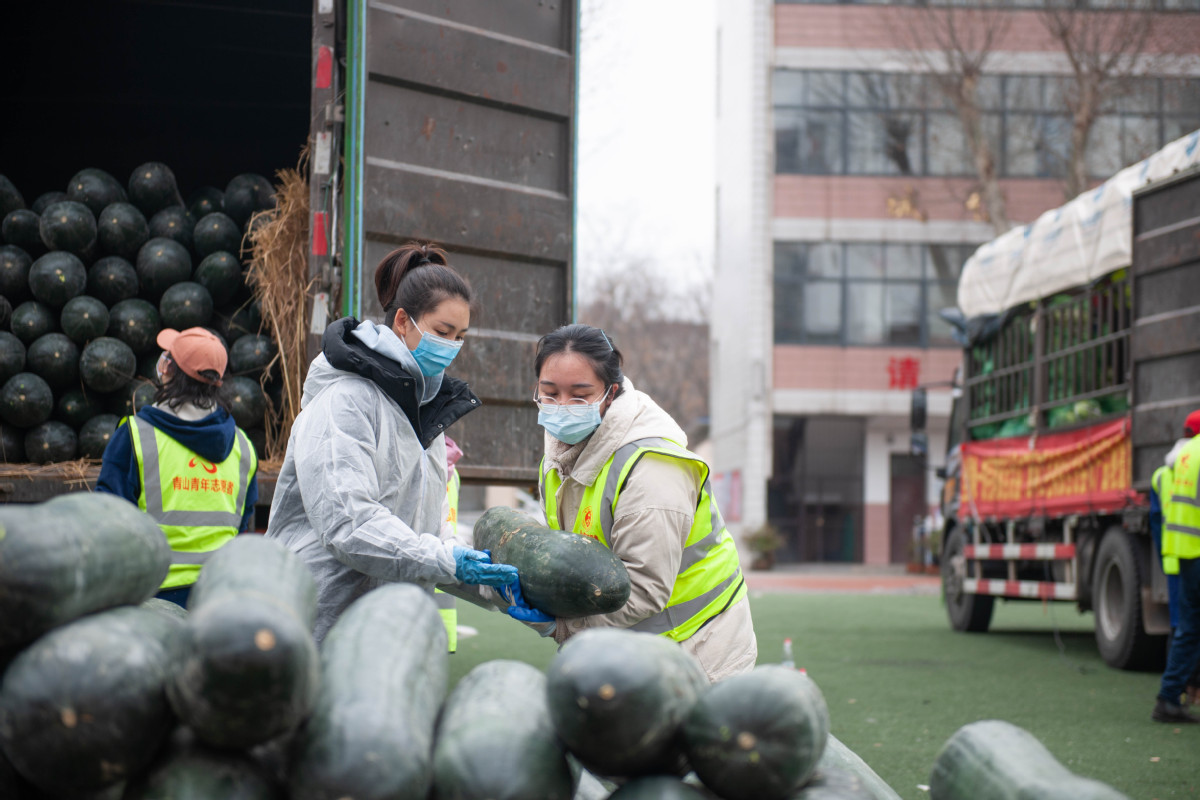 Hua Yuchen, a music teacher in Wuhan, takes on different assignments as a volunteer, including unloading donated supplies and taking the temperatures of drivers at a highway checkpoint. [Photo provided to China Daily]

Editors’ note: As the lockdown is lifted in Wuhan, Hubei province, China Daily takes a look at the lives of three people who have been working hard to fight the virus and keep the city running for the past two months.

Hua Yuchen, a music teacher in Wuhan, Hubei province, was one of the first to volunteer her services after the city was locked down on Jan 23 in an effort to contain the novel coronavirus outbreak.

“I had been following news of the outbreak and thinking what I could do for Wuhan, where I was born and grew up,” said Hua, 30, who works at Guanghua Primary School in the city.

She registered to become a volunteer after seeing a recruitment notice on WeChat in late January.

“I wanted to become a volunteer, but I did not know what I could do for people. I am not a doctor or nurse capable of saving lives,” she said.

When the lockdown was enforced, the city’s outbound trains, buses and flights were canceled, and buses, the subway and taxis also stopped running in the city.

“I was assigned as a driver probably because I have a license and a private car,” Hua said.

“In the first few days after the lockdown was imposed, many doctors and nurses, who previously relied on buses to get to work, had to walk or cycle.” 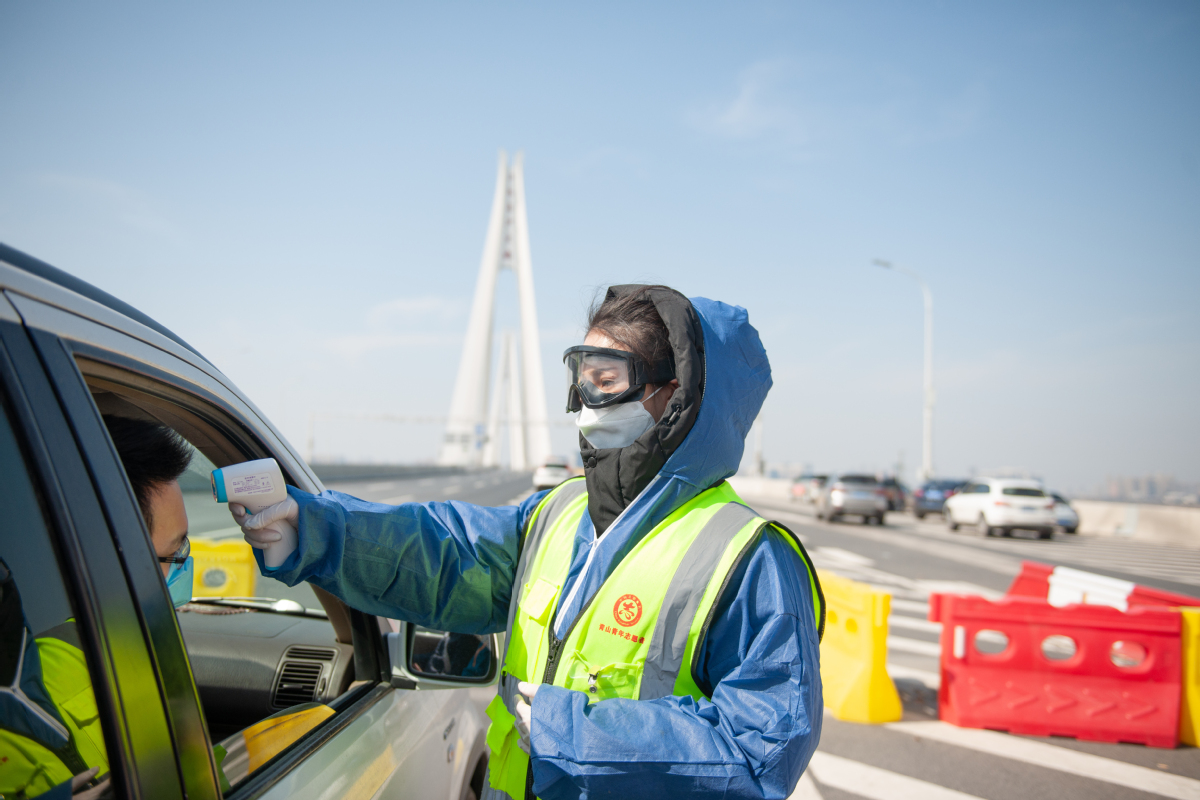 “In the beginning, I felt frightened to sit in the same car with doctors and nurses, but I soon overcame my fear. Doctors and nurses were already extremely stressed. I could not bear to see them walk for more than an hour to a hospital in order to treat patients,” Hua said.

Due to a lack of supplies, she and other volunteer drivers were not equipped with protective gowns.

“There was also a severe shortage of alcohol disinfectants. Sometimes, I had to use saltwater to disinfect the car,” Hua said.

She wears a face mask while driving, and to minimize risks, she always opens the windows of her car.

Hua has taken on additional tasks. She has helped unload donated supplies at a railway station and has also been assigned to highway checkpoints to take the temperature of drivers transporting necessities to the city. 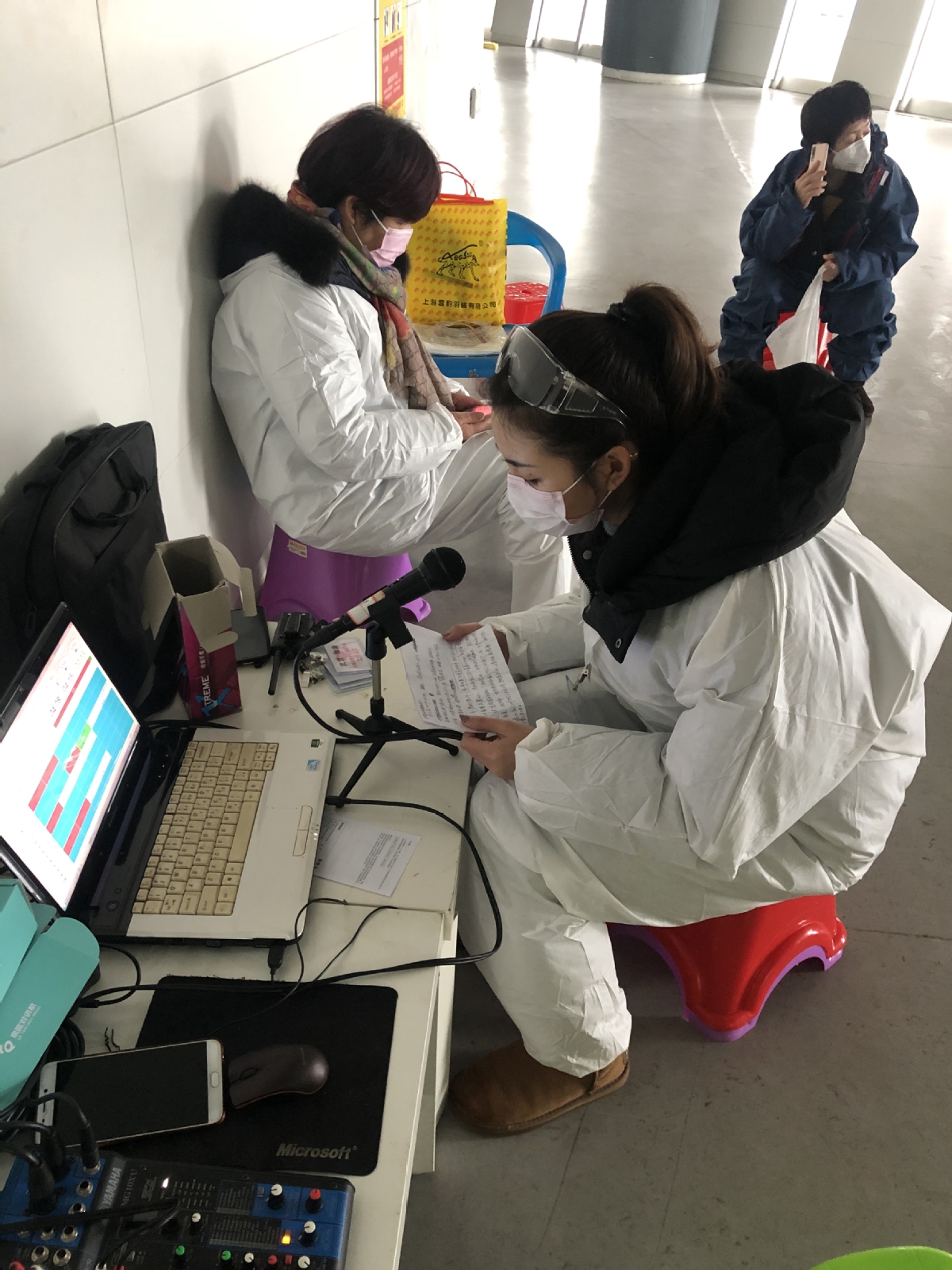 However, her happiest task has been broadcasting news and music over the internet to patients at a makeshift hospital.

“Although I could not see the patients, who were in the quarantine ward, I was proud that I could help relieve their anxiety and pain through my voice, and bring them hope,” she said.

Hua said her toughest time as a volunteer is when she returns home every night after work.

“I am very miserable before I unlock the door every day, and I’m really worried that I will infect my parents,” Hua said.

“At first, I did not tell them I had become a volunteer. I lied and said I was working overtime at school.”

However, when she later confessed to her parents, they supported her work, but told her to remain careful, Hua said.

“Many volunteers are struggling over the choices we have made, but we have been sticking to them. We are determined to work until the day the outbreak is over,” she said.

Despite the difficulties she has encountered, Hua said she feels lucky and proud to have become a volunteer.

“During this very unusual period, if I hadn’t been a volunteer, I may have become like some of my friends, who have been obsessed with sadness, helplessness and anxiety. But now I am happy, and every day I am eager to find out where my services are most in demand,” she said.

Hua added that when the outbreak ends she hopes that all medical workers and patients can go home and be reunited with their families.

“When that day comes, we can all take off our masks so that we can fully see each other,” she said, adding that she hopes all volunteers remain safe. 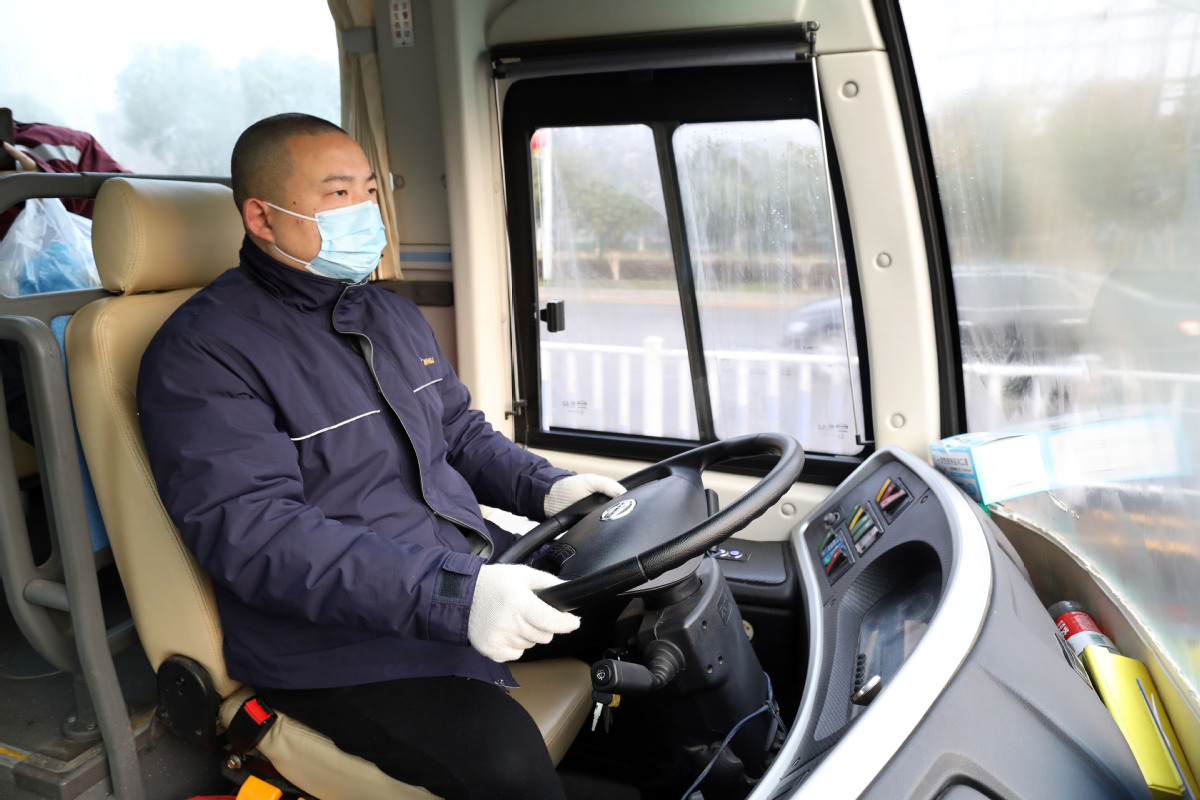 Wang Mian, 37, a bus driver in Wuhan, was hoping to have a good rest during the Spring Festival holiday in late January, but experienced exactly the opposite.

Before the outbreak, Wang, who transports medical workers between home and Tongji Hospital in the city’s Caidian district, mainly worked regular hours.

However, his workload increased suddenly after Wuhan was locked down.

With the number of cases in the city surging in late January, more medical facilities were assigned to solely receive COVID-19 patients, including Tongji Hospital.

“We became very busy two days after Spring Festival, when we were told to transfer all remaining non-COVID-19 patients－hundreds of them－to other hospitals across the city so that all the beds could be reserved for those with COVID-19,” Wang said.

Over the next few days, he and his colleagues drove between the airport, residential buildings, hotels and hospitals to transport doctors and nurses. They also catered to more than 2,000 medical workers sent from across the country to help fight the virus in Wuhan. By the time Wang returned home, other members of his family were asleep. 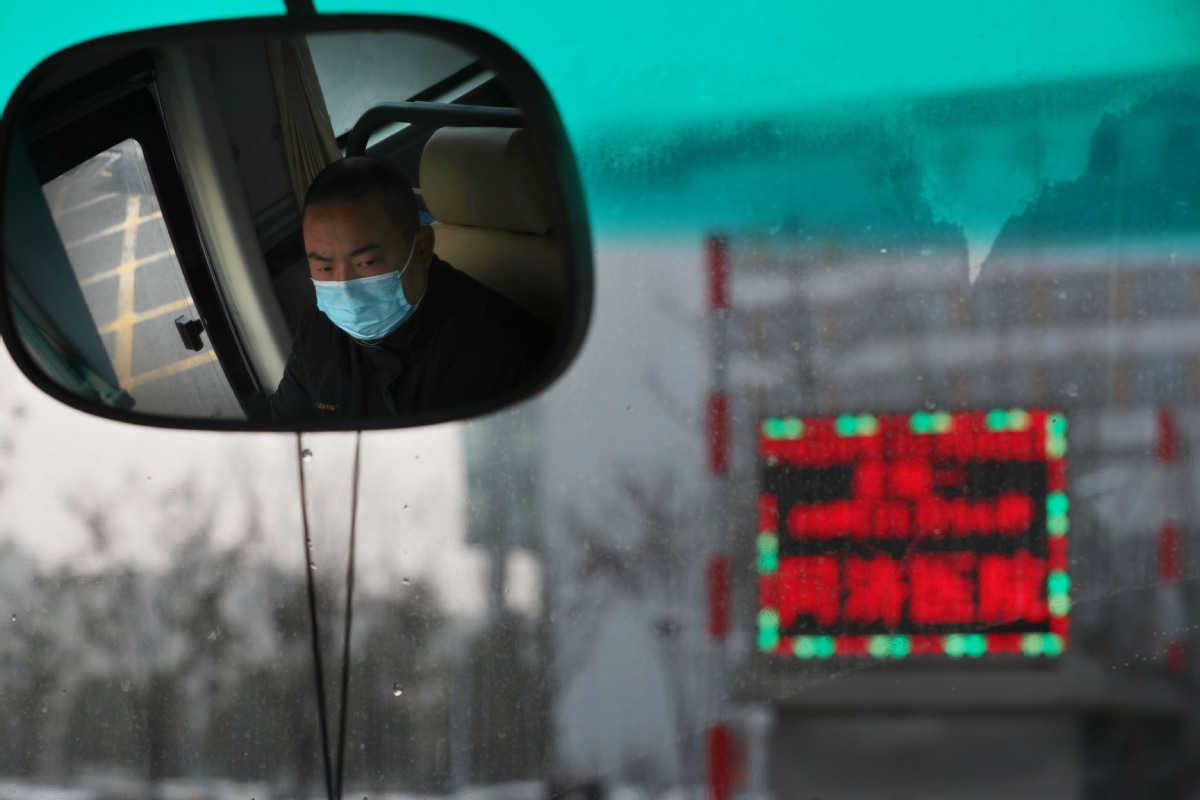 In addition to the extra work, he has been alert to the risks of infection. “Every morning before I set out, I wear a mask and disinfect the bus, which has 20 seats,” he said. “Initially, we had no protective gowns, and even doctors and nurses did not have enough of them.”

Despite suggestions by his employer that he stay at a hotel to avoid the risk of infecting family members, Wang returns home every day after work.

“I am worried about my wife, who stays at home alone all day, and I want to chat with her before she goes to bed,” he said.

Although Wang and his colleagues have worked every day, including weekends, since the Spring Festival holiday, none has asked for leave or to quit, he said.

“Nobody could foresee such an outbreak, and we must stick to our duties even when there are risks,” he said. “Who will take the medical workers to hospitals to save patients if we quit?”

Despite experiencing physical and mental stress, Wang said he always tries to remain optimistic and happy.

“I think the outbreak will eventually end and the difficulties will only be temporary. Being sad every day will only make you feel worse,” he added.

A native of Wuhan, Wang said he had been touched the most by the united front shown by people from all walks of life.

“I have never seen such solidarity among all kinds of people in the city. Everyone, including bus drivers, medical professionals and construction workers for makeshift hospitals, share one goal－we all want the outbreak to end as soon as possible. As a Wuhan resident, I am very proud,” he said. 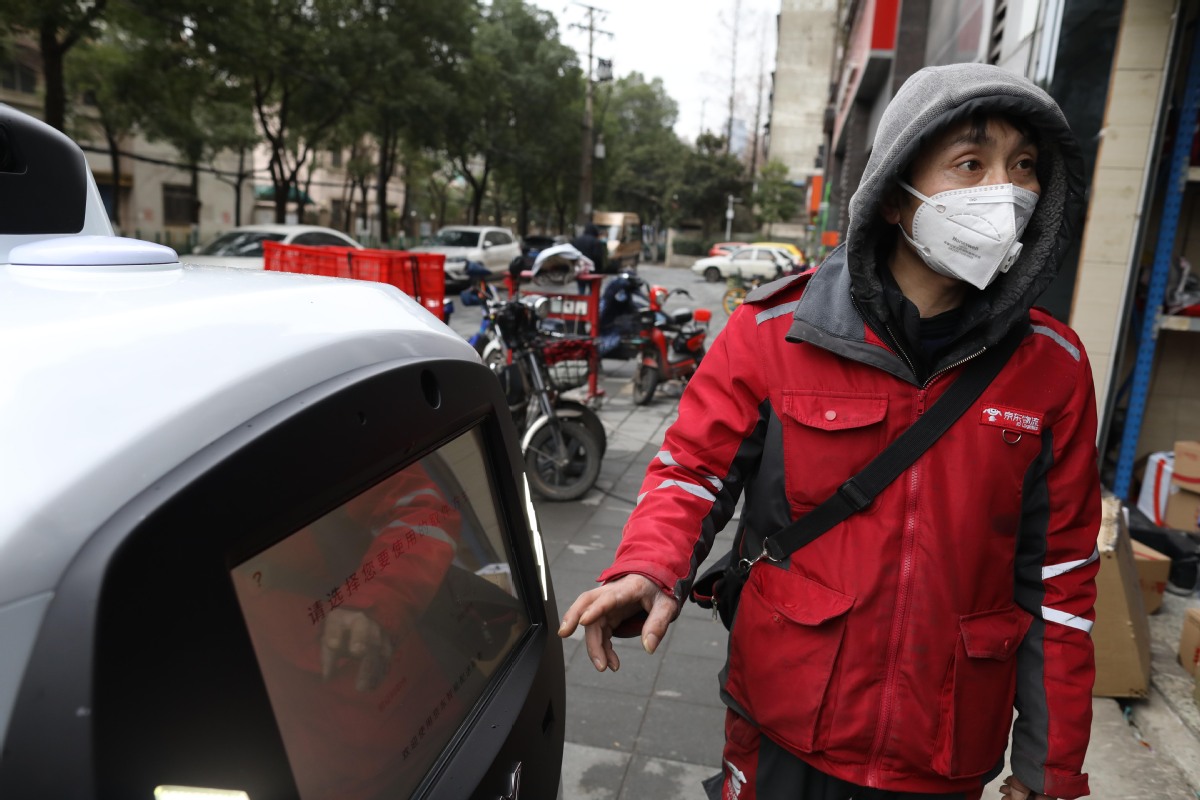 Since late January, Jin Jianbo, 39, an express delivery worker in Wuhan, has isolated himself from his wife and 6-year-old daughter. Worried about infecting them with the virus, he stays in a different room at the family home after work, eats alone and chats with them via mobile phone video.

“I am anxious when I leave home for work in the morning,” he said. “I once wanted to quit, but abandoned the idea when I realized many residents would not get food supplies without my services.”

Jin, from Sanmenxia, Henan province, has worked for JD, one of the country’s largest e-commerce platforms, since 2018. He said the past two months have been the most difficult time for him and his colleagues.

The company provides workers with face masks, gloves and protective gowns to reduce the chance of them becoming infected. However, Jin said he sometimes removes his gown before finishing work, as he feels too hot.

“As all residential areas are closed, we cannot deliver goods to the door and have to wait outside the gate,” he said. “In many residential buildings, the lifts have been put out of service to prevent the virus spreading, so it takes much longer to wait for residents to pick up their supplies.”

Due to the outbreak, the number of Jin’s orders has fallen, but he still has to complete more than 100 every day.

“Most of them are for food, such as rice, flour and cooking oil. Initially, face masks and disinfectants, which were ordered in large quantities, quickly sold out,” he said.

Despite his reduced orders, Jin is still working about 12 hours a day.

He said that about two-thirds of his colleagues are not at work because of the outbreak, with just nine on duty at the branch where he is based.

“Most of them returned to their hometown before the Spring Festival holiday and have not yet come back,” he said.

“Some of them who live in villages have found it difficult to return to the city, as roads have been blocked to control the outbreak.”

He hopes the virus can be eradicated as soon as possible and that life can return to normal.

“Then, I will happily be reunited with my family and will no longer feel afraid or worried,” he said.