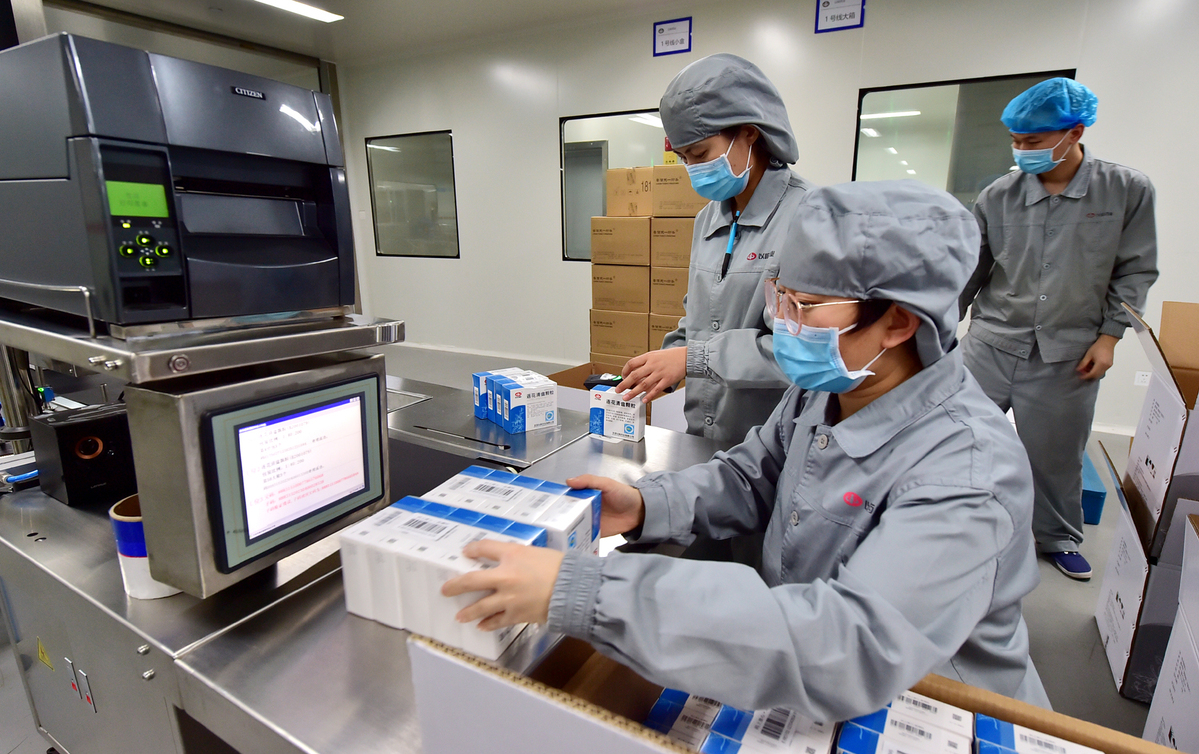 In the global fight against COVID-19, while most Chinese manufacturers are stepping up efforts to provide medical devices to the world, traditional Chinese medicine enterprises are helping the world combat the pandemic.

TCM has proved to have a positive effect throughout the coronavirus prevention and treatment period, industry experts said.

Zhang Boli, an academician at the Chinese Academy of Engineering, said TCM had significantly reduced the proportion of patients with mild symptoms becoming severe cases.

Tongjitang (Guizhou) Pharmaceutical Co Ltd, another unit of Sinopharm, donated two batches of preventive TCM worth a total of 135,000 yuan to France.

Shijiazhuang Yiling Pharmaceutical donated Lianhuaqingwen capsules worth 1.78 million yuan to aid Iraq in contagion prevention and control efforts. The compound herbal medicine has proved to be effective in treating COVID-19.

Meanwhile, Beijing Tong Ren Tang Chinese Medicine Co Ltd donated 4,000 doses of TCM to Singapore and Toronto. A total of 20,000 doses of its cold granules were delivered to Seoul.

The National Health Commission said that by the end of March, 91.5 percent of confirmed COVID-19 cases that used TCM treatment combined with Western medicine saw effective rates of over 90 percent.

At the end of March, Yiling’s Lianhuaqingwen capsules received registration approval from the Thailand Ministry of Public Health, allowing the company to sell the products in the Thai market. Previously, it has obtained marketing authorization in Brazil, Indonesia, Canada, Mozambique and Romania.

However, exporting TCM as a contagion prevention and control remedy has not been without difficulties. Industry experts noted that in some countries where TCM is not recognized by local medical laws and regulations, such products are not allowed to be used in local hospitals. In such instances, TCM donated by Chinese firms has mostly been used as preventive treatment.

Zhang said that problems such as insufficient innovation and low-level duplication were the main reasons behind the difficulties with TCM internationalization.

“A scientific TCM standard that conforms to international standards needs to be established as soon as possible. Chinese herbs should be listed as national strategic resources that offer strong protection if developed and utilized in the proper way,” Zhang added.

Meanwhile, standardized cultivation of Chinese herbs should be vigorously promoted to ensure a sustainable supply of TCM and help guarantee product quality and safety, he said.

Zhang said the fact that Lianhuaqingwen capsules were approved by the Thailand Ministry of Public Health represented a major industry breakthrough.

“The major problem for TCM internationalization lies in legislation, as including TCM into local markets requires a country to amend their own codes, which is very difficult,” he said.

“In addition, to raise the profile of TCM around the world is where we should make constant efforts. Now that TCM combined with Western medicine has proved to have an over 90 percent effective rate in treating novel coronavirus, it is a good time for us to build international credibility,” Zhang added.