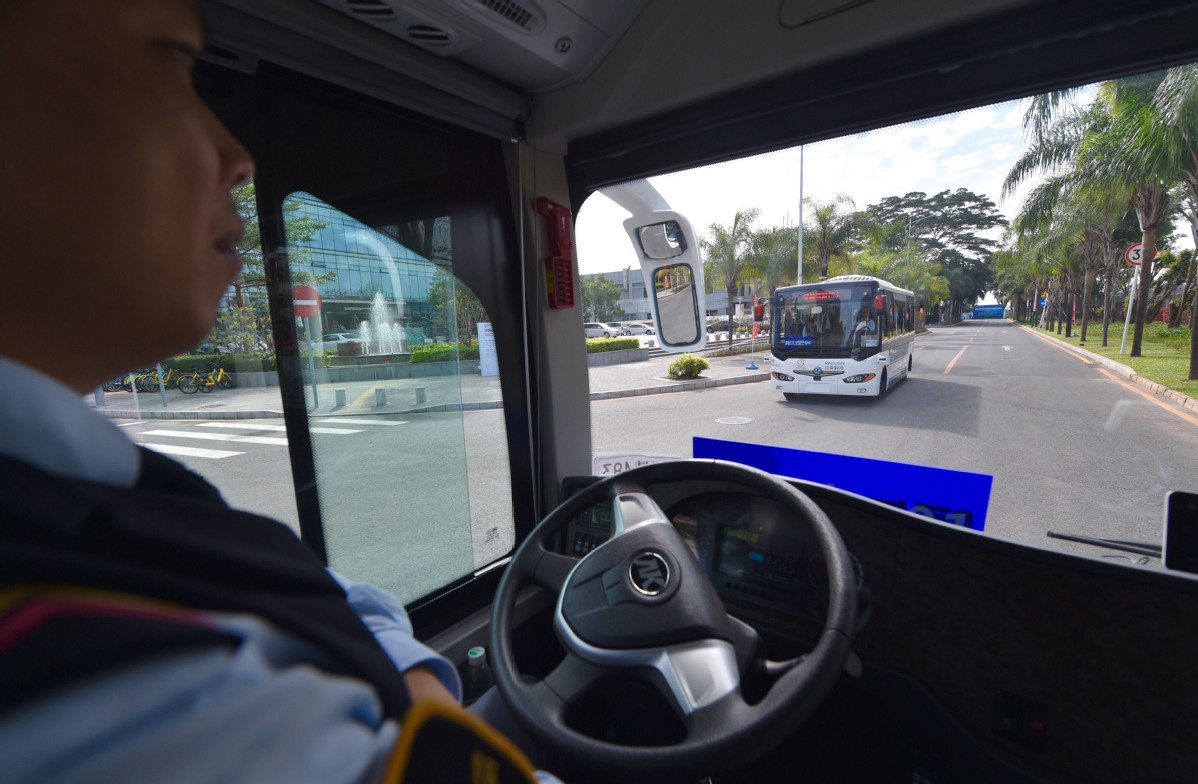 A driver participates in a test for buses supported by Haylion’s autonomous driving system in Shenzhen, Guangdong province. [Photo/Xinhua]

Self-driving vehicles may soon be a common sight in China and the industry could see rapid growth as the COVID-19 outbreak has underlined the importance of such vehicles during an epidemic, industry experts said on Tuesday.

“Autonomous driving has entered a new stage in China. We expect the segment to see major consolidation this year,” said Han Xu, founder and CEO of WeRide, a Chinese smart mobility company.

“Investors have realized that autonomous driving will be implemented on a large scale over the next three to five years. They have also realized that it is no longer a high-risk investment and more capital is needed to expand business and boost technological stability,” he said.

Autonomous driving gained traction and investments recently as investors started becoming more cautious about investing in a string of industries after the epidemic.

The sector has been seeing a flurry of big deals like the autonomous driving unit of Didi Chuxing getting a $300 million investment from Japanese tech giant SoftBank. Another autonomous driving firm Pony.ai finished its new round of funding totaling $462 million last month.

Wu Gansha, CEO of Chinese self-driving startup UISEE, believes that the sector is now ready for a take-off. “Investors are more confident on the commercialization of intelligent driving and hence willing to invest. From this year, we should start seeing large-scale commercialization of driverless vehicles,” he said.

“We have been seeing a healthy pickup in orders,” said Wu, whose startup focuses on high-level autonomous driving and completed a new round of financing in February.

During the epidemic, several hospitals and companies used self-driving vehicles to deliver necessities like masks and meals to patients and medical workers.

“Self driving has great application scenarios during the epidemic. If pure self-driving can be achieved, it is ideal to transport suspected patients as cross infection risks can be avoided,” said Han from WeRide.

By the end of last year, WeRide had launched trial runs of its Robo-Taxi in a 144-square-kilometer area in South China’s Guangzhou city. Passengers can order a self-driving taxi via its app and experience a driverless journey.

“Smart vehicles have become a global strategy and China has a strategic edge in developing smart cars with the complete automobile industry and evolving information technology,” the document said.

As of now, six cities in China have allowed autonomous vehicle makers to undertake passenger tests, including Beijing, Shanghai, Chongqing and Guangzhou.