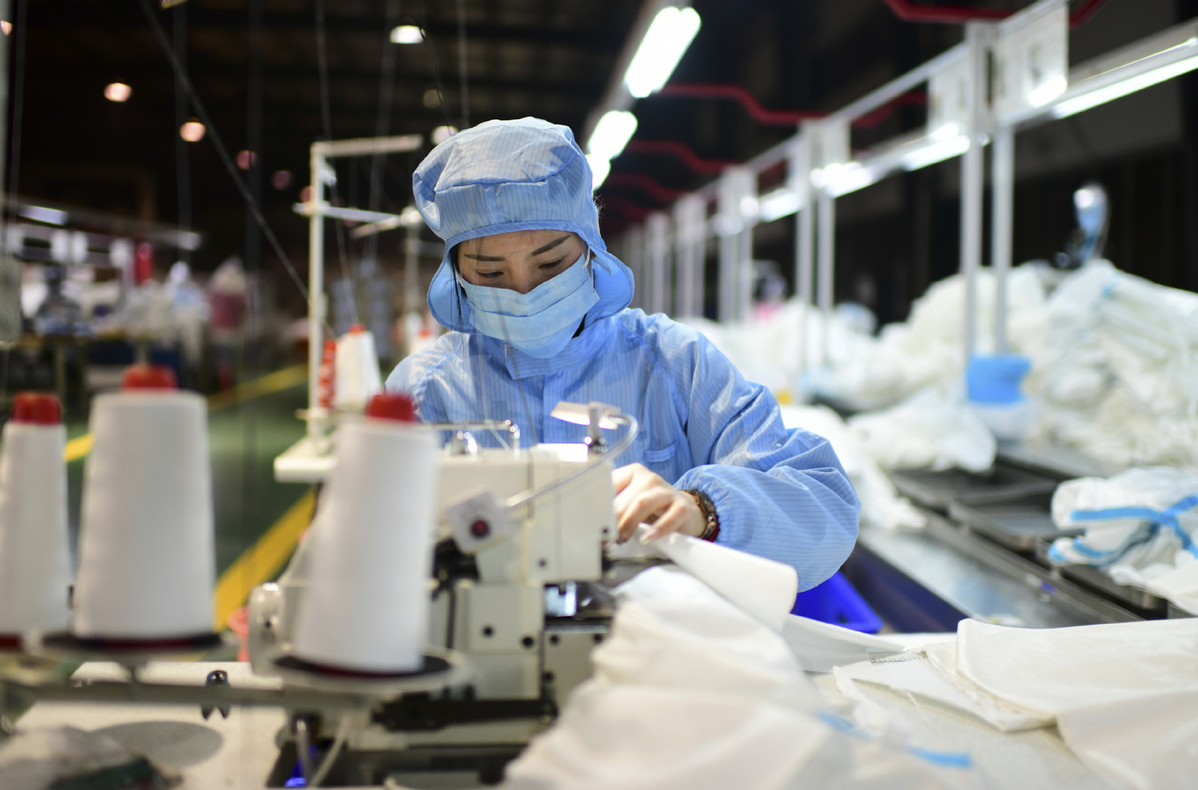 Workers produce medical shoe coverings at a company in the Bishan district of Chongqing on Feb 23, 2020. [Photo/Xinhua]

China is contemplating more measures to ease the tax burden of small and medium-sized enterprises, amid the accelerated production resumption, officials said on Tuesday.

Preferential tax policies for reinvestments by overseas companies will be enacted to further support the development of foreign businesses in China, while the roster of industries eligible for foreign investment will be further revised, said Wang Daoshu, chief auditor of the State Taxation Administration.

Taxpayers will be allowed to report their taxes in April based on the first quarter income, and the tax collection period will be extended to April 24 from April 20. The tax data will partly reflect the production resumption situation, while big data technology will be used to track the company reopening, said Cai Zili, an official with the STA.

Tax cuts and fee reductions totaled 402.7 billion yuan ($56.6 billion) in January and February, and nearly 158.9 billion yuan of it was in new tax cuts implemented after the novel coronavirus outbreak to counter downward pressure on the economy, especially to support small and medium-sized companies, according to the administration.

To support exporters, China has raised the export rebate rates to 9 percent and 13 percent for two groups of exported goods, while 1,464 categories of goods are enjoying zero export tax, the STA said.

By Monday, tax authorities had processed export rebates totaling 204 billion yuan of 230,000 companies. This has eased the tax burden and cash flow stress of exporters, said Wang Daoshu, chief auditor of the STA. The administration will work with other government departments to enact more tax policies to stabilize exports, he said.

“China has thus far achieved a significant victory with regard to tackling the novel coronavirus. However, there are two major risks that are blighting the growth recovery. External demand has been falling as the epidemic is spreading to more economies, while chances of a potential second wave of infections within China are also rising,” said a research note from Japan-based Nomura Securities.

“Beijing is ramping up policy support for virus-hit firms and households, but this may result in China’s fiscal conditions becoming more challenging in the near term,” said Lu Ting, chief economist of Nomura.

The government is also preparing to raise its fiscal deficit target, maybe higher than 3 percent as economists predicted, from 2.8 percent last year, and to increase the quota for net local government special bond. The authorities are also considering an issue of special sovereign bonds in the near future.