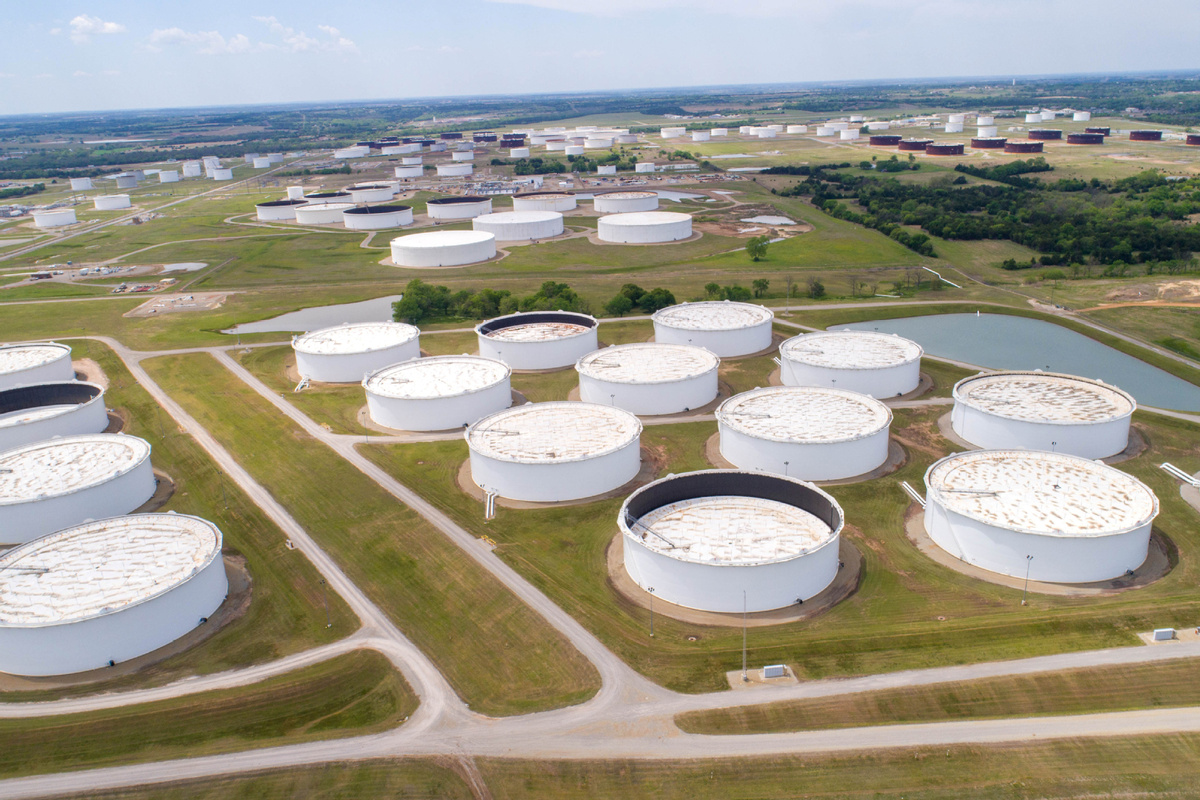 Crude oil storage tanks are seen in an aerial photograph at the Cushing oil hub in Cushing, Oklahoma, US, April 21, 2020. [Photo/Agencies]

Partly due to the coronavirus pandemic, international crude prices slumped in the past few months, with the benchmark Brent crude nosediving from about $68 per barrel in early January to around $25 at present.

The upstream of the oil industry including oil producers and oilfield service firms has been hit hard by the plummeting prices, said Dong Xiucheng, professor with the University of International Business and Economics.

The cost of domestic oil production is higher than importing from abroad. The more oil domestic firms produce, the more losses they may incur, Dong said.

Peng Huagang, an official with the State-owned Assets Supervision and Administration Commission of the State Council, said earlier this week that the plunging oil prices have partly led to steep profit declines in the domestic oil industry in the first quarter.

However, analysts said refiners may benefit from the price dive as they sit in the downstream of the industry chain and lower crude prices dragged down their production costs.

With higher profit prospects, an increasing number of small and medium-sized refineries resumed work. Some refineries in East China’s Shandong province have processed oil that was purchased earlier at $20 per barrel.

Amid the steep global price cuts, state-owned oil companies have to slash costs to keep afloat.

Noting that the company is facing unprecedented pressure, Dai Houliang, chairman of China National Petroleum Corp said the convergence of two black-swan events — the novel coronavirus epidemic and global oil price slumps — has hit both the supply and demand of the oil and natural gas markets, pushing the company to trim spending this year.

As one of the world’s biggest energy consumers, China has been building up stockpiles of crude oil, with imports rising 5 percent to 130 million metric tons during the first quarter.

However, China’s oil storages in some areas have been filled to near capacity, as the coronavirus epidemic disrupted business activities and kept more citizens indoors.

Currently, no more space is left for refined oil products, and most crude storage facilities have been booked, according to the state broadcaster CCTV.

Average rental prices of storage tanks have risen about 10 percent since the Lunar New Year, it reported.