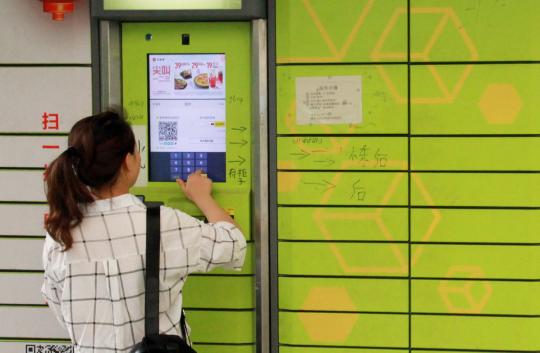 A woman retrieves a package from a Hive Box locker in Changzhou, Jiangsu province, on Saturday. (WANG QIMING/FOR CHINA DAILY)

Hive Box, China’s largest self-service package locker operator, has issued an apology to users and adjusted its charging policy for delayed parcel retrievals, which faced extensive criticism and a user boycott since taking effect on May 1.

The company provides small parcel lockers, usually installed in community compounds, where deliverymen can drop off parcels rather than making time-consuming deliveries to individual addresses. Hive Box had been charging deliverymen for the service for some time, but it was free for recipients until May 1, when the company decided to charge late fees for storage over 12 hours.

The company announced on April 29 that from May 1, users who failed to pick up parcels from lockers within 12 hours would be charged 0.5 yuan (7 cents) for every additional 12-hour increment, capped at a maximum of 3 yuan.

The new policy sparked outrage among users, with thousands declaring on the Sina Weibo microblog platform that they would boycott the service if the new rule was implemented.

While the lockers save deliverymen time, many people prefer goods to be delivered at their doorstep and are loath to pay for the locker service. Several communities in Zhejiang’s provincial capital, Hangzhou, as well as Shanghai and Beijing warned they would suspend the use of Hive Box lockers.

An open letter from residents of Zhonghuan Garden, a housing compound in Shanghai, went viral after being posted online. The residents complained that instead of delivering packages to them in person, deliverymen were putting parcels in the Hive Box lockers without getting consumers’ consent.

The Provisional Regulations for Express Delivery in China stipulate that recipients have the right to examine and receive their packages in person, as well as to choose if they want their package to be deposited in such lockers.

Residents also said in the letter that the free storage period of 12 hours was insufficient because by the time many of them returned home from work, they would find that their parcels in the locker had exceeded the time.

Established in 2015 with investments from four leading private delivery companies, including Chinese courier giant SF Express, Hive Box has developed into a leader in smart parcel locker service, which has evolved as a way to increase delivery efficiency.

Despite its market dominance, the company has been operating at a loss since 2016, according to China Business Journal. Fees recouped from deliverymen and advertising income are not enough to cover the cost of operating and maintaining the smart storage locker service in residential communities.

Hive Box responded in a Weibo post published on May 9 that the fee was intended to help the firm better serve users. The company said that it planned to encourage early pickup by offering cash incentives.

With no mention of a change to its original plan to implement late fees, the response failed to appease the public.

On May 12, the homeowner’s committee of Zhonghuan Garden appealed to the authorities to launch an investigation of Hive Box, alleging it was abusing its dominant market position.

After several interventions from consumers rights authorities and industry leaders, including the State Post Bureau, Hive Box announced on May 15 that it was “deeply sorry for the inconvenience it caused to consumers”.

The company said it will ensure that deliverymen only deposit parcels in the lockers after getting consumers’ consent. It will also extend the free storage duration from 12 hours to 18 hours. Storage during national holidays will be free of charge, and no storage fees will be charged on weekends for lockers in office buildings.

The new pricing policy will take effect nationwide on May 20.