/ NATIONAL DEBT COULD SURPASS $25 TRILLION AMID SPENDING TO COMBAT CORONAVIRUS

NATIONAL DEBT COULD SURPASS $25 TRILLION AMID SPENDING TO COMBAT CORONAVIRUS

The national debt is projected to reach or even surpass $25 trillion as the federal government attempts to combat the fall-out from the coronavirus pandemic with trillions of dollars in economic stimulus.

States and municipalities across the country have shuttered restaurants, bars, gyms, cinemas, schools, and public gatherings, while ordering all non-essential workers to stay home in a bid to curb the rapid spread of the COVID-19. Due to the uncertainty, the stock market has tanked and unemployment has surged, with millions of workers expecting to go without paychecks for at least the next few weeks.

In an effort to address the economic and public health concerns, Congress is currently working on a massive stimulus package to the tune of $1.3 to $1.4 trillion, according to President Donald Trump’s economic adviser Larry Kudlow. In total, the White House has hinted at $2 trillion or more of economic stimulus.

The stimulus spending will come as the U.S. was already planning for a budget deficit of about $1 trillion in the current fiscal year. As the national debt already stands at about $23.5 trillion, CNBC reported on Monday that the ballooning debt could grow to $25 trillion or higher in the coming months. 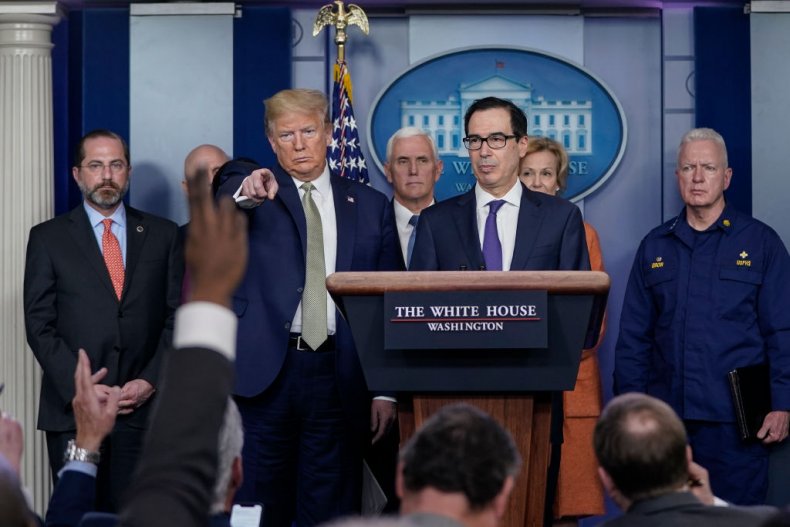 President Donald Trump and Treasury Secretary Steven Mnuchin, joined by members of the Coronavirus Task Force, field questions about the pandemic in the press briefing room at the White House on March 17 in Washington, D.C.DREW ANGERER/GETTY

When Trump took office, the U.S. national debt stood at about $20 trillion. During his presidential campaign, Trump promised to eliminate the national debt within eight years and predicted economic growth of 6 percent. In reality, annual gross domestic product (GDP) growth has peaked at less than half that level (2.9 percent in 2018) since the president entered the White House. With the economic stimulus packages currently moving forward, it also appears increasingly unlikely that the national debt will be eliminated any time soon.

In addition to the expansive stimulus package being worked on in Congress, the Federal Reserve on Monday announced a series of additional measures to shore up the economy. The central bank plans to buy up as many mortgage-backed securities and government bonds as necessary to boost the economy. Already, the Federal Reserve injected $1.5 trillion into short-term money markets earlier this month. It also cut interest rates to about 0 percent last week.

While health experts and some administration officials believe many businesses will need to remain closed for many weeks, as workers stay home across the country to prevent the spread of coronavirus, Trump suggested on Sunday evening that he was hoping for a different approach.

“WE CANNOT LET THE CURE BE WORSE THAN THE PROBLEM ITSELF. AT THE END OF THE 15 DAY [social distancing] PERIOD, WE WILL MAKE A DECISION AS TO WHICH WAY WE WANT TO GO!” he tweeted.

The New York Times reported on Monday that some Republican lawmakers and other administration officials have grown frustrated that the economy has ground to a halt due to the advice of health experts. Some are hoping to adjust federal guidelines to allow more people to return to work to keep the economy moving as the pandemic continues.