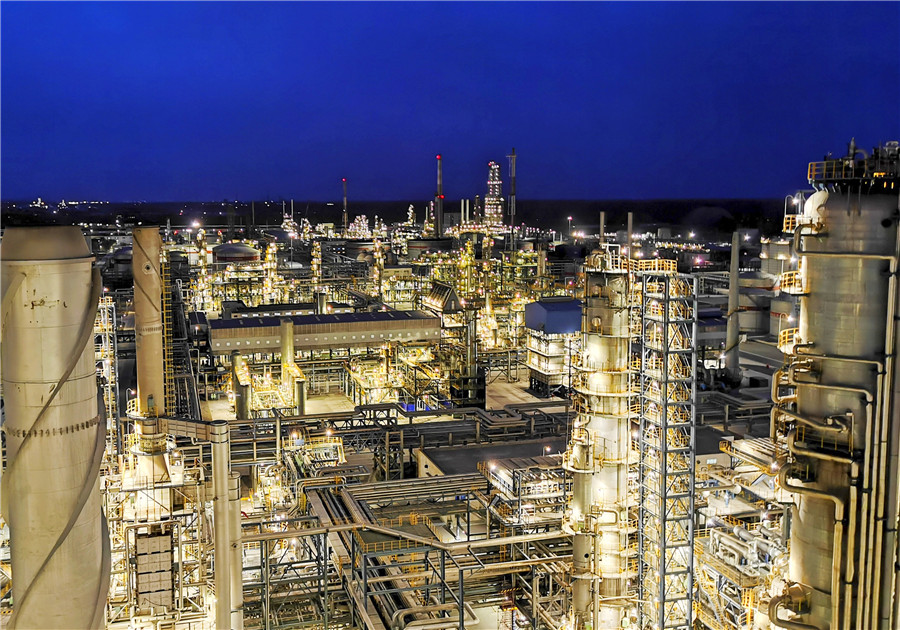 Crude oil is processed at Tahe refinery of Sinopec in Kuqa in the southern part of the Xinjiang Uygur autonomous region on March 24. [Photo by Hu Qingming / For China Daily]

China announced new debt financing plans and additional rate cuts after the quarterly economic contraction in order to limit the effects of the novel coronavirus pandemic and ensure that the economy is better placed to recover, according to officials and analysts.

The Ministry of Finance announced on Monday it would raise the front-loaded quota of local government special bonds by another 1 trillion yuan ($141.3 billion). Issuance of the increased quota should be finished by the end of May. Most of the debt is for infrastructure construction projects.

On the same day, the People’s Bank of China, the central bank, cut the benchmark lending rate－the loan prime rate－by 0.2 percentage point. It was the largest cut since the rate was launched in August 2019. Experts said the move is to lower financing costs for government and corporate sectors and accelerate business resumption.

China’s top-level policymakers held a meeting on Friday in which they said the country will use stronger macro policy tools to cushion the economic fallout. In the first quarter, China’s GDP fell 6.8 percent year-on-year amid lockdowns, while indicators suggested a substantial recovery of business activities in March.

The sudden virus outbreak had an “unprecedented impact” on China’s economic and social development, which was “extremely unusual” in the first quarter, said a statement issued after the meeting of the Political Bureau of the Communist Party of China Central Committee.

The meeting was presided over by Xi Jinping, general secretary of the CPC Central Committee. It called for more proactive fiscal measures, including raising the fiscal deficit ratio, issuing special central government bonds and increasing the quota of local government bonds, to help stabilize the economy.

Monetary policies should be more flexible, leveraging policy tools such as cutting reserve requirement ratios and interest rates, as well as relending, to maintain reasonably ample liquidity and guide the market lending rates to decline. Capital should be channeled into the real economy, especially to support medium, small and micro enterprises, the meeting stressed.

As the COVID-19 pandemic spreads around the world, experts highlighted risks of prolonged external challenges, and called for more policy support for business resumption, especially to assist small and medium-sized enterprises with financing difficulties, and accelerate the boosting of infrastructure investment.

“Economic recovery is expected to continue and to show up in the GDP data from the second quarter onward as more progress is made with the return to economic normalcy,” said Louis Kuijs, head of Asia Economics at Oxford Economics, a British think tank. “But the upturn will be slowed down by lingering consumption weakness and sliding foreign demand.”

“The stance of policymakers is key. So far, policy easing has remained modest. While we see more measures in the coming months, we don’t expect large stimulus,” he said.

In the first three months, the government’s general budgeted revenue dropped by 14.3 percent from a year earlier to 4.6 trillion yuan, with a sharper decline in tax income of 16.4 percent, influenced by business shutdowns and tax relief measures, according to data released by the Ministry of Finance on Monday.

“Fiscal income may continue to drop in the second quarter, but the decline is decelerating along with the economic recovery,” said Liu Jinyun, an official at the ministry who also disclosed that governments at all levels had spent about 145.2 billion yuan as of Sunday to contain the virus and its effects.

Local governments had issued 1.57 trillion yuan of new bonds by April 15, accounting for 85 percent of the 1.85 trillion yuan early allocation of bond quota for 2020, the ministry reported. The full-year bond quota will be released by the annual meeting of the National People’s Congress, which usually takes place at the beginning of March but has been postponed due to the outbreak. Economists predicted with the delivery of the 1 trillion yuan new quota, the issuance of local government special bonds will hit a record high in coming weeks.

“Further debt-funded investment may mitigate economic stress in the short term,” said Amanda Du, an analyst with Moody’s Investors Service. “However, the challenges associated with structural rebalancing will become more prominent, and fiscal stress from the coronavirus and the associated economic slowdown will remain high over the long term.”

To coordinate with the fiscal stimulus measures, the People’s Bank of China cut the one-year loan prime rate to 3.85 percent from 4.05 percent. The five-year LPR, which is a reference rate for mortgage loans, dropped by 0.1 percentage point to 4.65 percent.

More rate cuts, including reductions in open market operation rates, LPR and the benchmark deposit rate, may be the policy responses to implement the high-level meeting’s instructions, which can help ease debt pressure for the government and corporations, said Ming Ming, a senior analyst at CITIC Securities.