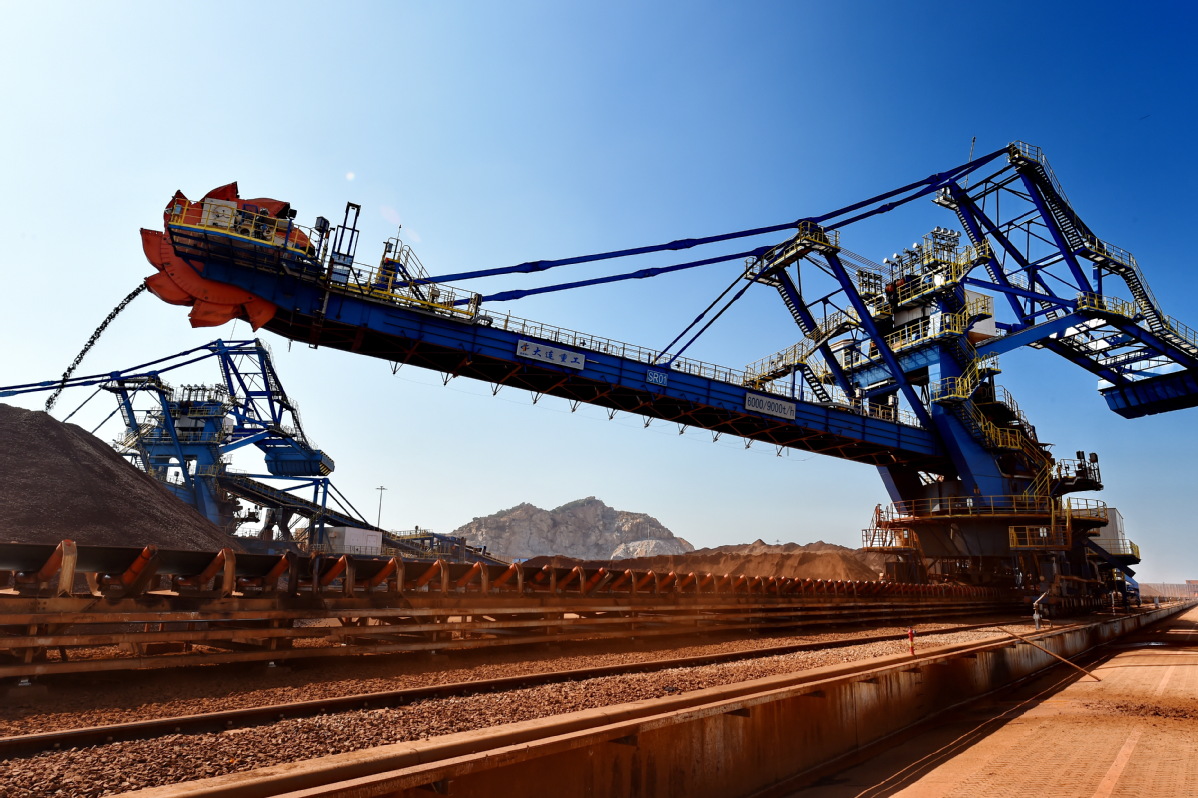 Iron ore is moved by a giant crane at a port in Meizhouwan of Quanzhou, Fujian province. [Photo/Xinhua]

The start of 2020 saw slumps in steel prices but fluctuations in imported iron ore prices at high levels, which industry experts said was a reflection of domestic market demand and supply, but was also shaped by non-market factors such as pricing mechanisms.

They also said high imported iron ore prices will not likely continue due to factors including excessive global output of the commodity and tumbling prices for scrap metal, an alternative that avoids the need for iron ore.

China imported 262.73 million metric tons of iron ore in the first quarter, up 1.3 percent year-on-year, at an average of $90.59 per ton, up 11.7 percent in terms of price, according to official data from the General Administration of Customs.

At the same time, average finished steel prices for the first quarter decreased 5.7 percent year-on-year, according to the China Iron and Steel Association.

Prices for imported iron ore kept increasing since early April after a slump at the end of March, before fluctuating in recent days.

The administration said imports of iron ore for March dropped 0.6 percent year-on-year to 85.91 million tons, with the average price falling to $89.76 per ton.

He Wenbo, CISA Party secretary, said at a news conference on April 22 that the divergence of steel prices and imported iron ore prices has brought negative pressure on steel companies trying to reduce costs and increase profitability.

“The industry should make efforts to enhance communication among upstream and downstream players and foster fair, just and open market order of both steel products and iron ore,” he said.

Luo Tiejun, CISA vice-chairman, said the current pricing mechanism for imported iron ore relies too heavily on some spot price indexes that have failed to reflect supply and demand changes in the physical market.

The association, as well as many other institutions, predict global supply of iron ore resources will increase in the second quarter and the remainder of the year, as output is stable despite the COVID-19 pandemic, Luo said.

About 60 million tons of steel-making capacity has been shut down globally, and reduced iron ore demand is projected to exceed 30 million tons for the second quarter, he said.

But he believes the most direct factor was the hindered supplies to the domestic market, although the global supply is rather excessive.

Despite the COVID-19 pandemic, pig iron output during January-February in China increased 3.1 percent year-on-year, while imports of iron ore rose only 1.5 percent over the period, he said.

Chen added that if the growth of China’s steel output slows down or decreases, the demand for iron ore will become weaker and the steel industry’s profitability will be improved.

Qiu Hanxuan, an analyst at Huatai Securities, predicted in a recent report that imported iron ore prices may go down because shipments from the world’s top four iron ore miners including Vale SA and Rio Tinto are likely to increase in the second quarter amid the background of weakened demand in both global and domestic markets.

The pandemic has forced a number of foreign steel mills to shut down, while there is an upward trend of iron ore inventories at both major ports and steel mills in China, Qiu said.

In addition, as scrap metal prices will probably stay at a low level and even decline against gradually increasing supplies, imported iron ore prices will also be negatively impacted, Qiu said.

However, Chen said the improved productivity of steel capacity, growing domestic demand for steel and COVID-19’s impact on global iron ore production and logistics will add uncertainty to the price of imported iron ore.