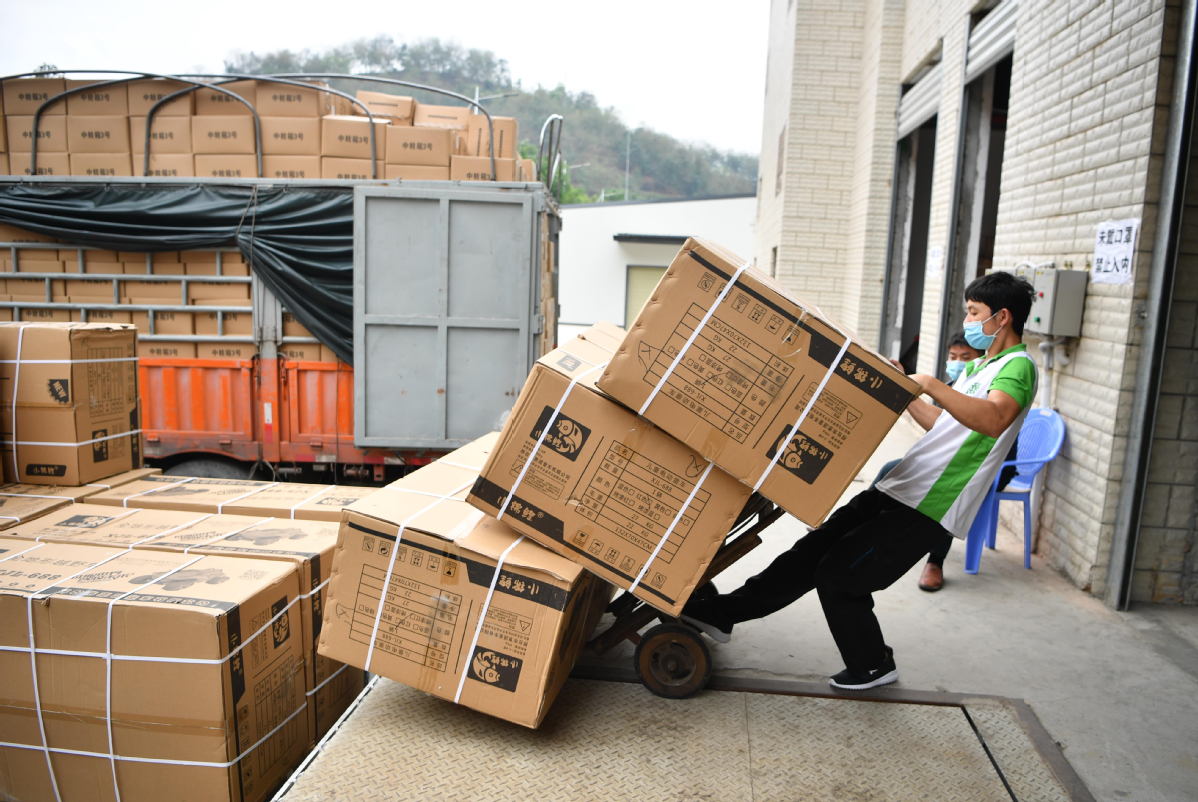 An employee loads packages for cross-border shipments onto a truck at a warehouse in Hekou, Yunnan province, on March 20. [Photo/China News Service]

Wedding gowns, home appliances, apparel and auto parts are among some of the key consumer goods that the government of Suzhou, Jiangsu province, recently promoted via a livestreaming session.

The event on April 10, co-organized by cross-border e-commerce site AliExpress, aimed to promote the city’s small and medium-sized enterprises, whose export-oriented businesses have been severely squeezed by the novel coronavirus pandemic’s impact on key markets overseas.

The initiative is part of a bigger push as the country looks to cross-border e-commerce to revitalize COVID-19-battered foreign trading activity. Participating local authorities, including Sichuan and Fujian provinces, along with Suzhou and AliExpress, expect the number of participants in the initiative to eventually top 100.

“To help export-reliant enterprises weather the storm and turn crisis into opportunity, we’ve teamed up with local governments to bolster exports and create new business opportunities for SMEs backed by our digital infrastructure,” said Wang Mingqiang, general manager of AliExpress.

Wang said the purpose is to connect domestic suppliers directly with overseas customer needs, which raises efficiency and lowers costs. And thanks in part to the promotional activities, newly opened stores on AliExpress－which operates in 230 economies－enjoyed triple digital growth in March compared with the previous month.

Fast-rising e-commerce platform Pinduoduo has entered into a similar partnership with the government of Ningbo, Zhejiang province. The pair pledge to promote 15,000 local enterprises and expect to transform an anticipated 20 billion yuan ($2.83 billion) in export deals next year into domestic sales.

Through its “New Brand” project, the platform also promised to provide data support, research and development advice, platform or promotional recommendations, as well as introduce a customer-to-business model for Ningbo’s export-driven companies in a bid to help them better tap domestic client demand.

China is seeing cross-border e-commerce as a bright ray of hope amid gloomy global trade, which the World Trade Organization said could contract by as much as 32 percent year-on-year in 2020.

“Cross-border e-commerce is set to greatly complement, if not replace, traditional trade to become an important driver in the next three to five years,” said Zhu Qiucheng, CEO of Ningbo New Oriental Electric Industrial Development Co Ltd, an exporter of electronics.

“The top-down policy design, coupled with hands-on measures by e-commerce platforms, will work to walk local businesses out of the shadows, stimulate economic potential and bring more opportunities over the long term.”

Tmall Global, which sells overseas goods to Chinese customers, announced a plan to support importers of milk powder by offering a seamless logistics service, lowering or even waiving duty free warehouses and initiating a more flexible import scheme based on predictions of consumer demand.

“Our goal is to ensure the constant supply and stable pricing of imported milk powder during a turbulent time when fears of supply shortages lead to price spikes,” said Qiu Min, who is in charge of maternal and baby products at Tmall Global, adding that the company is leveraging its supply chain, logistics and service capabilities to ensure the constant and orderly supply of key products.