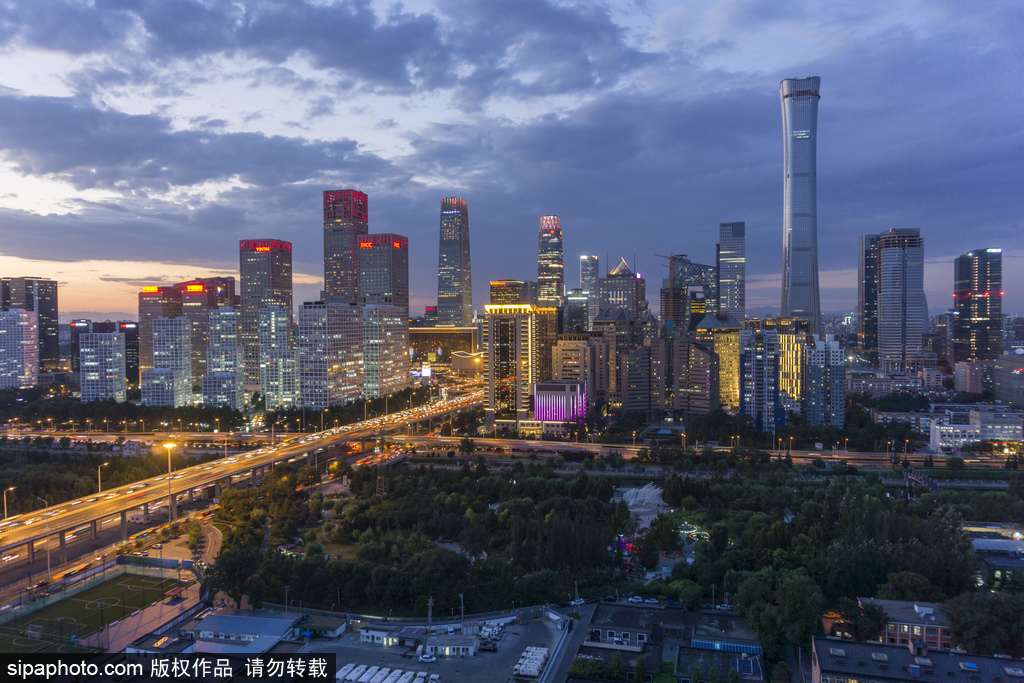 A photo shows a night view of the CBD area in downtown Beijing, capital of China. [Photo/Sipa]

Multinational companies are showing their strong commitment to the Chinese market, with some of their local factories posting record production figures and a new foreign investment project being launched despite the challenges presented by the COVID-19 pandemic.

“The chip packaging and testing plant has been operating at full capacity since January,” Bhatia said. “The local government has been very helpful in helping us maintain operations. None of our employees are infected with the virus.”

“China is a very important market for us,” Bhatia said, adding that the company is not changing its plans for the nation.”We really value our employees here. Amid the outbreak, they kept coming to work and ensuring continuous production at the highest level. That is really exemplary,” he added.

Micron is one of the foreign companies that have benefited from the China’s sizable market, as the nation makes steady progress in improving its business environment.

In the past five years, US tech heavyweights Apple Inc, Intel Corp and Finnish telecom equipment maker Nokia have seen 60 percent growth in their China-generated revenues, according to a report by Roland Berger and Emlyon Business School, a leading French business school.

“Today, when the trend of anti-globalization is on the rise, China still strives to offer more opportunities for foreign-invested enterprises by refining its legal framework and widening market access, significantly boosting the confidence of foreign stakeholders,” Depoux said.

On Wednesday, multinational oil and gas corporation ExxonMobil broke ground on its chemical complex in Huizhou, Guangdong province, a sign of China’s rebounding economy as the outbreak’s impact subsides.

The complex, with a total investment of about $10 billion, will be built in two phases. The first phase, with an ethylene cracker and downstream production equipment, is scheduled to be completed by 2023 when construction on the second phase will begin.

ExxonMobil Chairman and CEO Darren Woods said the project reflects China’s growing commitment to foreign direct investment and fostering innovation, and the company will continue its strategic long-term investments in the nation.

Huang Libin, a spokesman for the Ministry of Industry and Information Technology, said on Thursday it has taken decades for the current global supply chain systems to take shape, which enables the most efficient circulation of goods and services.

“China’s well-planned industrial systems and sound infrastructure gives us the confidence to retain foreign companies. We will also work harder to create a better pro-business environment for them and offer higher-quality services,” Huang said.

In contrast to some global narratives, our China-based data suggests that the majority of our members will not be packing up and leaving China anytime soon,” said Alan Beebe, president of AmCham China.

Beebe said certain companies in certain industries may diversify away from China or even expand manufacturing operations in the US given the current climate. But this is “a costly, time consuming, and largely irreversible process”, he added.

“It is worth emphasizing that China appears ahead of the global curve when it comes to restarting the economy following months of lockdown, and many of the reasons why companies are in China in the first place still hold true today,” he said.

The Chinese government’s decisive handling of the novel coronavirus outbreak also won applause from foreign companies, and boosted their confidence in the nation.

Yang Xu, president of Intel China, said the company’s chip plants in Dalian, Liaoning province, and Chengdu, Sichuan province, have been working non-stop amid the outbreak.

“We have shared China’s anti-epidemic experience with global manufacturing systems,” Yang said, adding there is no escaping the fact that China and the US will be the dual engines driving the world forward for the next 20 to 30 years.

According to Yang, Intel has a steadfast, long-term strategy in China. “We will travel together (with Chinese partners) and travel far,” he said.

“The outbreak will not change China’s position as an important part of the global supply chain,” Zhao added.