/ China will help, US needs to act: Xi to Trump

China will help, US needs to act: Xi to Trump

Washington with urgent task to seek assistance in face of epidemic 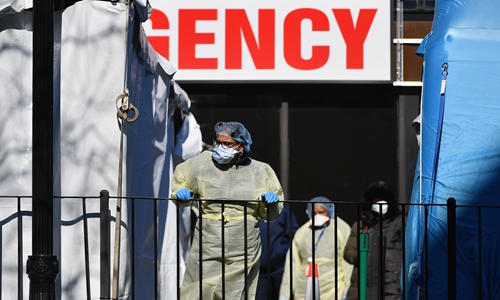 Medical workers look out of the Elmhurst Hospital Center in Queens, New York on Thursday. Elmhurst reported 13 COVID-19 patients died at the hospital in a 24-hour span, according to local officials. The US has had more confirmed coronavirus cases than any other country as of Friday. Photo: AFP

Less than 20 hours after the G20 leaders’ online summit ended, US President Donald Trump, who had rarely interacted with Chinese President Xi Jinping at this unusual meeting in addressing the widening pandemic, invited the Chinese top leader to a phone call on Friday morning, proving that the coronavirus spread has become so severe in the US that Washington had to seek Beijing’s help despite the war of words provoked by the Trump administration in recent days. China has also delivered a clear message to the US that cooperation is the only correct choice, urging the latter to take practical moves to show its goodwill and sincerity to work with China in battling the pandemic, which is a common enemy of humankind, observers said. Three days ago, Trump stopped using the controversial term “Chinese virus,” and such a shift in attitude showed that asking for help from Beijing has become an urgent task. However, US officials and organs including the Secretary of State and US Embassy in Beijing continue to use provocative rhetoric, leading to growing doubts in China on the real intention and willingness of the US to cooperate.America’s crisis

The US has had more confirmed coronavirus cases than any other country as of Friday, with more than 85,000 infected cases, and the death toll in the US surged to 1,300, according to Johns Hopkins University. The Trump administration has been harshly criticized for its delayed response and ineffective handling of the public health crisis, considering the severe shortages of medical supplies and lack of preparation, which is now weighing heavily on the US’ health system.Since the outbreak in China, Trump has also been playing down the impact of the coronavirus in the US, even comparing it to last year’s seasonal influenza, ignoring warnings from communities and medical professionals. Doctors and nurses across the country are scrambling to cope with a surge in coronavirus patients, and in the US epicenter New York City, authorities set up makeshift morgues outside hospitals – the first time since 9/11 – and a nurse without enough personal protective equipment (PPE) had reportedly died, media reported. Some medical workers even wear trash bags to protect themselves, as safety gear is scarce. “The gravity of the situation in the country has forced Trump to express willingness to seek China’s help, not to mention that the US needs to buy a huge amount of medical equipment, including personal protective equipment, test kits and ventilators,” Li Haidong, a professor at the Institute of International Relations of China Foreign Affairs University, told the Global Times. “This is an objective that Trump needed to achieve [through the phone call],” Li said. Xi told Trump that China understands the current difficult situation of the US and is willing to provide support within its capacity, and some provinces, cities and enterprises in China are providing medical supplies to the US. As the largest manufacturer of medical supplies, China exports essential hospital supplies to the world while the yearlong trade war between the US and China has forced US companies and medical providers to access other countries for the procurement of vital equipment, which could not timely meet the growing demand in the US, as the disease has spread faster than ever.For instance, the US imported about 48 percent of PPEs from China, including 42 percent of face shields, 70 percent of mouth-nose-protection equipment, and 39 percent of gloves, according to data compiled by  the Peterson Institute for International Economics. China’s factories hit by outbreaks from January to February, leading to declining export orders, also stifled supply to the US. The more urgent and critical task for governors in the US is to purchase ventilators, which are necessary to prevent Americans from dying. However, states like New York face a severe shortage in equipment, which has already forced local officials to start ordering from China. “Responding to the pandemic is a global matter and its success relies on the effort of each country in the world, and no country should be absent,” Diao Daming, a US studies expert at Renmin University of China in Beijing, told the Global Times on Friday. The US should cherish a consensus that the international community has reached after the G20 summit by making joint efforts to fight the COVID-19, pushing forward international cooperation instead of bringing unnecessary obstacles, Diao noted.China is expected to deliver this clear and positive message to the US side through joint efforts in pandemic response that “collaboration is the only correct choice,” urging it to take practical action, he said. 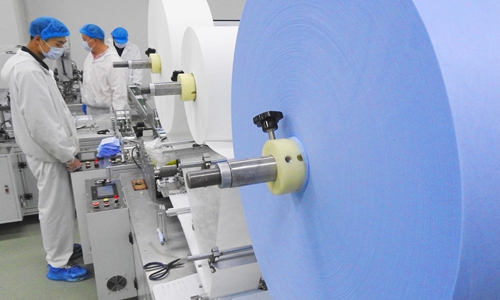 Workers at a factory in Lianyungang, East China’s Jiangsu Province, are busy making face masks for overseas markets where the coronavirus has been spreading quickly. The company has received orders from the US and Belgium. Photo: cnsphotos

Time to actFollowing the phone call with Xi, Trump said in a tweet that, “China has been through much & has developed a strong understanding of the Virus. We are working closely together. Much respect!”The Trump administration has been engaged in a smear campaign in recent days, shifting the blame by accusing Chinese authorities of a lack of epidemic information which caused a delay in its response to this unprecedented public health crisis. In a much more malicious attempt, some senior officials, including US Secretary of State Mike Pompeo, GOP lawmakers Tom Cotton, Paul Gosar and House Minority Leader Kevin McCarthy made racist remarks by calling COVID-19 the “Chinese virus,” which drew harsh criticism in China and in the US. The US Embassy in Beijing has intentionally exacerbated the ongoing war of words launched against China and provoked Chinese netizens as it posted two statements on its Sina Weibo account on Thursday that referred to COVID-19 as “Wuhan virus.”The embassy made no direct comment on using such term when it was contacted by the Global Times on Friday via email. Lü Xiang, a research fellow on US studies at the Chinese Academy of Social Sciences in Beijing, told the Global Times on Friday that since Trump promised to Xi that he will ensure interruptions or obstacles to China-US cooperation would be removed, and has stopped calling COVID-19 “Chinese Virus.” It is time for him to take control of his senior officials inside the administration, “especially Pompeo and his trade advisor Peter Navarro.”These officials keep stigmatizing China and passing the buck of the US outbreak on many occasions, including the G7 meeting and interviews with US media, the analyst said. As an apparent positive gesture of calling the top Chinese leader, the Trump administration is considering moving toward a “truce” amid clashes between the two countries. However, analysts said it is unlikely to change the course of China-US ties due to growing confrontations on geopolitical and ideological fronts. For instance, Trump’s signing of the “Taipei Act” also reflected its intention to serve its own interests at the expense of damaging China-US ties to provoke instability in the region, analysts warned. China-US relations are at an important juncture, Xi emphasized during the phone call. Cooperation between the two nations is mutually beneficial, while confrontation will only hurt the two sides, the Chinese President said.“Trump should give the public of the two countries an explanation – can’t he control his officials or is he just conniving with them? If this hostile behavior doesn’t stop, cooperation and assistance from China will not take place as he wants,” Lü noted.