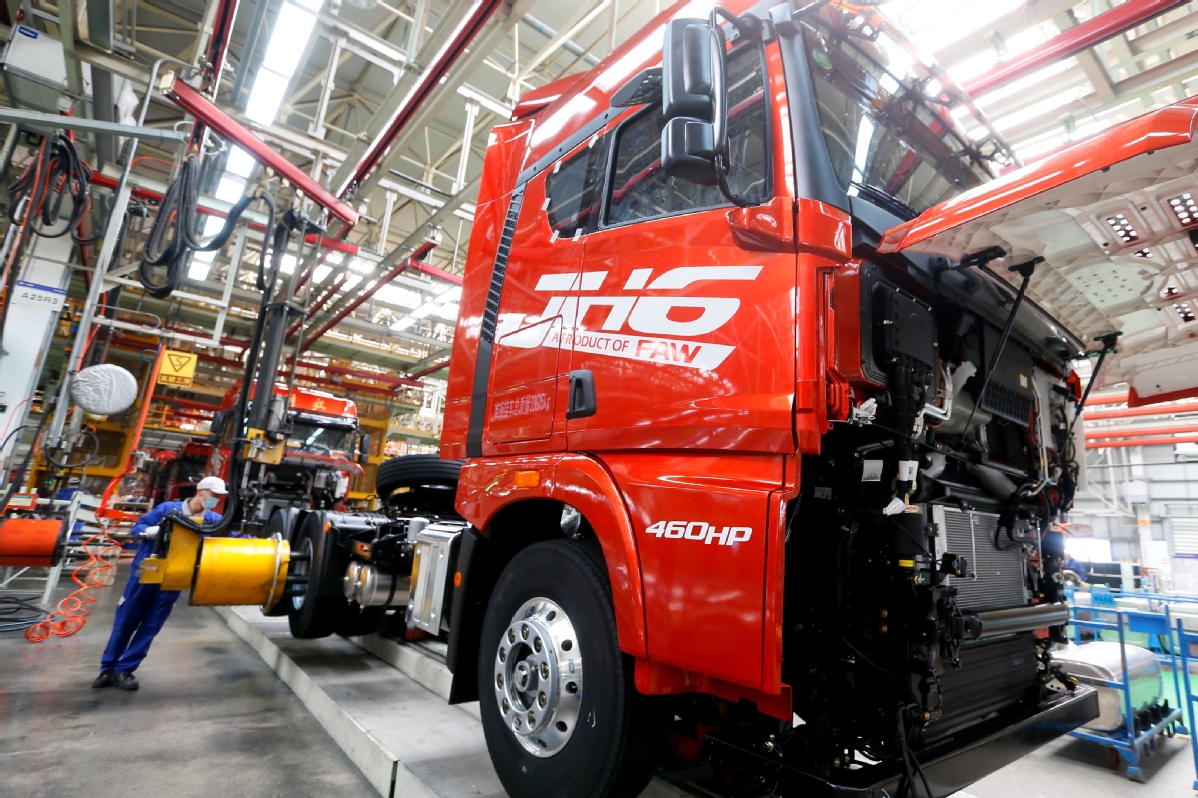 An employee works on a production line of FAW Jiefang Automotive Co’s subsidiary in Qingdao, Shandong province.[Photo by Liang Xiaopeng / For China Daily]

China is exploring ways to further boost the domestic demand for new energy vehicles and promote the sustainable development of the industry as more companies resume production since the COVID-19 outbreak, the nation’s top industry regulator said on Thursday.

Huang Libin, a spokesperson for the Ministry of Industry and Information Technology, said reviving the demand for automobiles will help mitigate the pandemic’s fallout on the industry.

The ministry will work hard to implement the State Council’s decision in late March to extend subsidies for new energy vehicles to 2022, Huang said. The subsidies, which have been in place since 2009, were scheduled to be stopped by the end of this year.

According to Huang, the ministry will come up with guidelines for the sector from 2021 to 2035 with an eye on boosting sales and the healthy development of the industry.

On Thursday, the industry regulator also unveiled a plan to build a hydrogen-energy-powered car industrial chain in four years.

In March, NEV sales declined by 53.2 percent on a yearly basis in China, compared with the 75.2 percent plunge in February, data from the China Passenger Car Association show.

Overall, China’s industrial development continued to recover in the first quarter of this year, with telecommunications and high-tech sectors back on track as key drivers.

Huang said that on average, 99.1 percent of the large-scale companies had restarted operations by Tuesday.

“The country’s industrial development will face new challenges due to the global economic uncertainties as a result of the pandemic, but it won’t influence the sound industrial fundamentals,” said Huang.

Ao Li, head of technology and standard institute at the China Academy of Information and Communications Technology, said: “Influenced by the epidemic, the country’s telecommunications industry has seen slowed growth pace to some extent but it is obvious that the industry has withstood the test.”

During the first quarter of this year, online traffic, especially the use of internet and smartphones, exploded as millions of Chinese were stuck at home, Ao said.

“5G has been one of the main gainers. About 198,000 5G base stations have been built by the end of March and major cities like Beijing and Shanghai have achieved basic connections,” he said.

Ao’s comments follow the ministry’s information and communication head Wen Ku’s remarks on Thursday that 5G development has continued to prosper during the epidemic.

By Wednesday, 96 kinds of 5G smartphones and terminals had got market approval, a sharp increase compared with 39 of last year. Over 20 million 5G terminals have been connected to the network by the end of March.

“Many provinces have rolled out sound policies to encourage telecommunications companies to carry out 5G infrastructure construction. There is no problem for the country to build 500,000 base stations by the end of the year,” Wen said.