With the north side of Qomolangma recently covered by 5G networks, netizens can now enjoy livestreaming videos from the world’s highest mountain.

Offered by China Telecom and China Mobile, two of the nation’s leading telecommunication providers, the livestreaming videos display the beauty of the mountain, which is known in the West as Mount Everest.

On April 19, China Telecom teamed up with China Central Television to provide a round-the-clock, live, high-definition broadcast with a 360-degree view.

Meanwhile, China Mobile offered a livestreaming video showing a 360-degree view of Qomolangma between April 19 and 20 via the company’s video platform MIGU Video.

In a posting on social media platform Sina Weibo, netizen Gang Duoji said he appreciated the livestreaming videos as Qomolangma was one of his favorite places, but he was unable to visit it as it’s too far away.

“Now I can observe its beauty with the 5G livestreaming broadcast on my phone, it is really incredible!” said Gang. 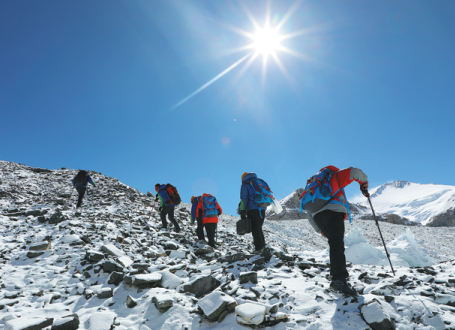 China Mobile technicians climb Qomolangma, also known as Mount Everest, to work on the installation of a new 5G base station on Saturday. CHINA DAILY

The Tibet branch of China Mobile said it started building the 5G infrastructure for Qomolangma earlier this month.

So far, it has finished building three 5G base stations, including at locations above altitudes of 5,300 meters, the installation of two more base stations at an attitude of 6,500 meters is expected to be completed by this weekend.

The north side of Qomolangma is located in Dingri county of the Tibet autonomous region, and the regional authorities plan to accelerate the application of 5G networks.

Qizhala, chairman of the Tibet autonomous region, said at the third session of the 11th Tibet People’s Congress in early January that all the major towns and cities in the region would be covered by 5G networks by the end of this year.

More than 98 percent of villages in Tibet had been linked by 4G networks, optical fiber cable and broadband internet services by 2019.

But building a 5G network on the “roof of the world” is no easy matter.

Li Chongming, an official of the networks department at the Tibet branch of China Mobile, described the project as challenging, tough and risky.

Li, who is also the field chief coordinator of the ongoing 5G network installation project, said such a project required higher levels of skill in technology and construction.

Upon its completion, the 5G network will cover all the climbing routes of the north slope to the summit.

“Many climbers come from zero-altitude places, so altitude sickness is a common problem for most people, and it is worse at altitudes such as 6,500 meters,” he said.

Wang Xiaobo, an employee of the networks department of the Tibet branch of China Mobile, said, “It’s a challenge both for the mind and body to work at such high altitudes,” adding that many of his colleagues suffered problems such as dry skin, sleep loss and headaches.

“Due to the harsh environment and the lack of oxygen, the transportation of materials and construction work was very difficult up there, and more than 40 yaks and 60 workers were hired to carry the materials.”